You Did It Again!

Thank you to all of you who made calls to the Governor and the Head of TDOC when you received TCASK’s email Abolition Update last week. As you know, Paul G 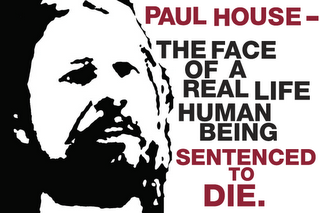 regory House had been moved to Deberry Special Needs Prison, where he is denied visitors, denied a wheelchair, did not receive a bath or a tooth brush for over a week, and was unable to call his mother. As if this wouldn’t be a bad enough way to treat people convicted of crime, it is made all the worse by the fact that Paul House is innocent!

But Paul was finally allowed to call his mother Joyce this weekend. The attendants brought the phone in and said, “Call your mother.” So some of our phone calls finally made it through. And Paul called from the wheelchair that he had finally been provided!

Now he is still in Special Needs, which is not ideal. When he called his mom he had to ask her what day it was, since he has no watch, no tv, and no way to stay connected to the outside world. And his MS still goes largely untreated. All the more reason, given the Supreme Court’s recent ruling that no reasonable juror would have found him guilty, that Paul House needs to be released immediately and Tennessee needs to admit its near fatal mistake.

But once again, the hard work of TCASK volunteers made a difference, so thank you. Together we can get Paul House a wheelchair, we can get him home to his mother, and we can end the inhuman practice of capital punishment in our state once and for all.

Fairly, there are numerous aspects you would like to think about medications. All discount medicaments save money, but few online drugstores offer better deals than other online drugstores. There isnвЂ™t anything you canвЂ™t order online anymore. Remedies like Deltasone ordinarily is used to treat diseases such as eye problems. Glucocorticoids naturally occurring steroids, which are easily absorbed from the gastrointestinal tract. There are varied drugs for every conditions. Cialis is a remedy prescribed to treat many illnesses. What do you already know about long term side effects of cialis? What consumers talk about how long does it take for cialis to take effect? A general sexual complaint among men is the erectile disfunction. Sexual problems mostly signal deeper problems: low libido or erectile disfunction can be the symptom a strong soundness problem such as soul trouble. Albeit the erectile malfunction itself isnвЂ™t necessarily dangerous, erectile malfunction is sometimes one of the early warning symptoms of other underlying health conditions that can be very much dangerous. Unfortunately nearly all over-the-counter medicines have sometimes dangerous aftereffects, from muscle aches to death. If you buy any erectile dysfunction medicaments like Cialis, check with a physician that they are sure to take with your other drugs. Do not take unwanted medications. Take Cialis to your local chemist’s shop which will dispose of them for you.