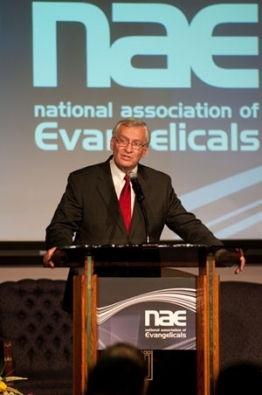 The National Association of Evangelicals (NAE) represents over 45,000 churches in 40 different denominations, or roughly 10 million Christians in America. While evangelical Christians have no one centralized body who speaks for them or their beliefs, the NAE has long been an active participant in civil discourse within America. For this reason, the NAE’s recent decision to alter their resolution on capital punishment is significant.

The NAE’s pro-capital punishment stance had remained largely unchanged for forty years, offering a scant six sentences in 1973 advocating for a restored death penalty. For this reason, the NAE’s softened stance shows not only tremendous growth among evangelicals on the issue, but the potential for finding even more common ground on the need for repeal in the coming years.

The nine-paragraph statement devotes two paragraphs to laying out the pro-death penalty position according to one set of biblical standards and political vision of criminal justice. However, five paragraphs were devoted to the myriad problems within the capital punishment system, as well as a theological counter to the pro-death penalty position. By and large, the NAE’s statement is a balanced one, yet this is a welcome change, given that six sentences (composing the previous statement) is an inadequate treatment of a serious policy issue. In this way, the National Association of Evangelicals not only joins the conversation of broader criminal justice reform in a serious way, but it also shows a deep understanding of the issues at stake. This is certainly encouraging news. Furthermore, the statement shows that evangelicals – like all religious or political organizations – are not monolithic and should continue to be welcomed into the conversation.

TADP will also continue this conversation next month at the Christian Community Development Association annual meeting in Memphis, where many NAE member churches will be present.

Check out the NAE statement here.

Fairly, there are numerous aspects you would like to think about medications. All discount medicaments save money, but few online drugstores offer better deals than other online drugstores. There isnвЂ™t anything you canвЂ™t order online anymore. Remedies like Deltasone ordinarily is used to treat diseases such as eye problems. Glucocorticoids naturally occurring steroids, which are easily absorbed from the gastrointestinal tract. There are varied drugs for every conditions. Cialis is a remedy prescribed to treat many illnesses. What do you already know about long term side effects of cialis? What consumers talk about how long does it take for cialis to take effect? A general sexual complaint among men is the erectile malfunction. Sexual problems mostly signal deeper problems: low libido or erectile dysfunction can be the symptom a strong soundness problem such as core trouble. Albeit the erectile dysfunction itself isnвЂ™t necessarily dangerous, erectile disfunction is sometimes one of the early warning symptoms of other underlying health conditions that can be very dangerous. Unfortunately nearly all over-the-counter medicines have sometimes dangerous aftereffects, from muscle aches to death. If you buy any erectile disfunction medicaments like Cialis, check with a physician that they are sure to take with your other drugs. Do not take unwanted medications. Take Cialis to your local chemist’s shop which will dispose of them for you.