As we look to hire an organizer here in the TCASK state office, one of the big questions I always ask applicants is, “What is the difference between an activist and an organizer?” Basically, what is an organizer’s goal? There are a lot of possible answers, but, for me, an organizer works to make themselves obsolete by empowering the people they work with to take effective action on their own.

It’s a tough job and I don’t know how regularly we all succeed, but today, I got an email from a TCASK member that reminded me that, occasionally, we do get it right. By permission, I’m going to share the email with all of you:
“Alex, 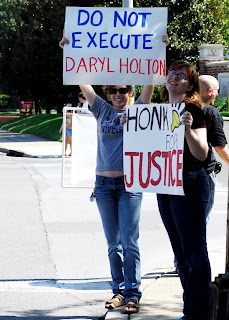 Just want to thank you again for being such a good leader and organizer for those of us from Memphis who have been working to end the death penalty in Tennessee, and especially for the Justice Day on the Hill experience. Without your leadership, I probably would not have requested an appointment with my reps for last week’s Catholic Day on the Hill. I returned to Nashville with confidence to speak up about immigration reform because of my years of involvement in teaching English to immigrants and refugees. I brought two people with me from (my church) who had never done this before. (One) was especially concerned about health care and TennCare reform because of her job as a social worker with the elderly poor. And they looked to ME as if I knew what I was doing! You’ve made me a more effective advocate because I not only speak up locally now, but I am no longer timid about approaching our representatives who make policy decisions.”
TCASK works hard to build the skill set of our activists with trainings and events like Justice Day on the Hill. It’s really thrilling to know that we are succeeding!
Thank you to all the activists who are making our work a success!

Fairly, there are numerous aspects you would like to think about medications. All discount medicaments save money, but few online drugstores offer better deals than other online drugstores. There isnвЂ™t anything you canвЂ™t order online anymore. Remedies like Deltasone ordinarily is used to treat diseases such as eye problems. Glucocorticoids naturally occurring steroids, which are easily absorbed from the gastrointestinal tract. There are varied drugs for every conditions. Cialis is a remedy prescribed to treat many illnesses. What do you already know about long term side effects of cialis? What consumers talk about how long does it take for cialis to take effect? A general sexual complaint among men is the erectile dysfunction. Sexual problems mostly signal deeper problems: low libido or erectile malfunction can be the symptom a strong health problem such as heart trouble. Albeit the erectile dysfunction itself isnвЂ™t necessarily dangerous, erectile malfunction is sometimes one of the early warning symptoms of other underlying health conditions that can be very dangerous. Unfortunately nearly all over-the-counter medicines have sometimes dangerous aftereffects, from muscle aches to death. If you buy any erectile disfunction medicaments like Cialis, check with a physician that they are sure to take with your other drugs. Do not take unwanted medications. Take Cialis to your local chemist’s shop which will dispose of them for you.