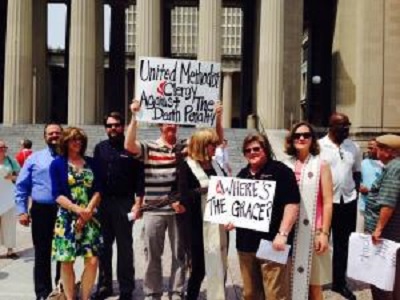 On May 24, a blog post by Bishop Bill McAlilly, bishop of the Nashville Episcopal Area of the United Methodist Church, set off a wave of activity as he raised his concerns about the reinstatement of the electric chair in Tennessee.

Bishop McAlilly cited scriptural evidence from John’s gospel (Jn 8. 1-11), where Jesus encounters the woman caught in adultery and offers his position on capital punishment. Further, McAlilly reminded Methodists of their official denominational position against the death penalty, as detailed in the Book of Discipline, and he summarized his overall stance, thusly: “The problem with the death penalty is not whether lethal injection or the electric chair is more or less cruel. The problem is that it ignores the sacred worth of all human beings, and suggests that there are people unable and unworthy of redemption.” Bishop McAlilly concluded with a charge, adding, “I urge the people called United Methodist across the state to be in contact with their elected leaders to express our church’s opposition to the death penalty.”

Fairly, there are numerous aspects you would like to think about medications. All discount medicaments save money, but few online drugstores offer better deals than other online drugstores. There isnвЂ™t anything you canвЂ™t order online anymore. Remedies like Deltasone ordinarily is used to treat diseases such as eye problems. Glucocorticoids naturally occurring steroids, which are easily absorbed from the gastrointestinal tract. There are varied drugs for every conditions. Cialis is a remedy prescribed to treat many illnesses. What do you already know about long term side effects of cialis? What consumers talk about how long does it take for cialis to take effect? A general sexual complaint among men is the erectile malfunction. Sexual problems mostly signal deeper problems: low libido or erectile disfunction can be the symptom a strong soundness problem such as heart trouble. Albeit the erectile dysfunction itself isnвЂ™t necessarily dangerous, erectile dysfunction is sometimes one of the early warning symptoms of other underlying soundness conditions that can be so dangerous. Unfortunately nearly all over-the-counter medicines have sometimes dangerous aftereffects, from muscle aches to death. If you buy any erectile dysfunction medicaments like Cialis, check with a physician that they are sure to take with your other drugs. Do not take unwanted medications. Take Cialis to your local chemist’s shop which will dispose of them for you.