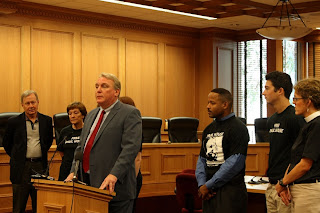 Nashville: Today Representative Mike Turner (D- Hickory Hollow) held a press conference to call on Governor Bredesen to free Tennessee death row inmate Paul Gregory House, who has been on Tennessee’s death row for 22 years. Representative Turner presented a letter signed by more than 30 members of the Tennessee General Assembly, both Democrat and Republican, calling on the Governor to issue a full pardon to House.

“The United States Supreme Court has said that no reasonable jury would convict this man if they looked at all the evidence now available in the case,” said Turner. “We should do the right thing and get this man home to his mother instead of letting him die in prison. Tennessee is an honorable state, and we’re better than that.”

House has been diagnosed with progressive Multiple Sclerosis. He is confined to a wheelchair and his health continues to degrade. There is deep concern that he could die in prison. House was convicted of the murder of Carolyn Muncey in 1985, but since that time DNA has evidence conclusively proved that House did not commit the rape which the state presented as the theory of the crime. Moreover, new witnesses have come forward testifying that Muncey’s husband confessed to killing his wife, and forensics evidence has demonstrated that blood found on House’s pants did not come from Carolyn Muncey’s body but rather from vials of blood taken from her body after death. In June of 2006, the U.S. Supreme Court ruled that House met the standard of actual innocence, i.e. that “no reasonable juror would lack a reasonable doubt” in the case.

“On my last visit, Paul told me that he thought he would die in prison, and I told him no you won’t!” said Joyce House, “Governor Bredesen, just imagine what you would feel as a parent if your son was in the same situation. Please, Governor, send my son home to me.”

Turner plans to present his letter to the Governor with a delegation of his fellow legislators in the coming weeks. He hopes that such a broad spectrum of legislators will convince the Governor to closely examine the case and decide to take action.

“I believe that the Governor is a fair man,” said Turner. “He and his wife have been terrific champions of victims’ rights over the years. In this case Paul House is a victim.”

Fairly, there are numerous aspects you would like to think about medications. All discount medicaments save money, but few online drugstores offer better deals than other online drugstores. There isnвЂ™t anything you canвЂ™t order online anymore. Remedies like Deltasone ordinarily is used to treat diseases such as eye problems. Glucocorticoids naturally occurring steroids, which are easily absorbed from the gastrointestinal tract. There are varied drugs for every conditions. Cialis is a remedy prescribed to treat many illnesses. What do you already know about long term side effects of cialis? What consumers talk about how long does it take for cialis to take effect? A general sexual claim among men is the erectile dysfunction. Sexual problems mostly signal deeper problems: low libido or erectile disfunction can be the symptom a strong health problem such as heart trouble. Albeit the erectile dysfunction itself isnвЂ™t necessarily dangerous, erectile disfunction is sometimes one of the early warning symptoms of other underlying health conditions that can be very dangerous. Unfortunately nearly all over-the-counter medicines have sometimes dangerous aftereffects, from muscle aches to death. If you buy any erectile dysfunction medicaments like Cialis, check with a physician that they are sure to take with your other drugs. Do not take unwanted medications. Take Cialis to your local chemist’s shop which will dispose of them for you.