Student Conference on the Death Penalty 2010 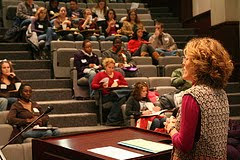 February 6 has come and gone, and the student conference that we have been preparing for came to fruition on Saturday with approximately 125 students, parents, and professors in attendance. We had an all-time high of 165 people registered, but we could not control the weather, and the snow and rain kept some people home—including our keynote, Diann Rust-Tierney. Despite the minor setback of our Washington D.C., snowed-in keynote, we kicked off the conference with a showing of The Empty Chair, a moving film that documents the responses of four families struggling with the murder of a loved one. Our day then proceeded with two rounds of well-attended workshops. Stacy led the workshop, Death Penalty 101, with the help of Michael McCormick, the 125th death row exoneree. Our own Denver Schimming and NAMI’s Dixie Gamble provided an informative and thought provoking workshop on mental illness and the death penalty, and our third workshop was led by Shane Truett, one of our SOS speakers. He shared his story about the murder of his brother and his journey from being a proponent of the death penalty to an opponent. All of these educational workshops gave students the opportunity to think hard about capital punishment and ask challenging questions.

After lunch, we heard from Amnesty International’s Southern Regional Director, Jared Feuer, who joined us from Atlanta, GA. He spoke about the death penalty in light of human rights, and used the case of Troy Davis to highlight the errors of the system in regards to innocent people being executed. The U.S. Supreme Court continues to wrestle with the question of whether or not it is unconstitutional to execute a convicted defendant who is actually innocent. Justice Antonin Scalia has does not believe that innocence alone is enough to overturn a death sentence:

This Court has never held that the Constitution forbids the execution of a convicted defendant who has had a full and fair trial but is later able to convince a habeas court that he is “actually” innocent. Quite to the contrary, we have repeatedly left that question unresolved, while expressing considerable doubt that any claim based on alleged “actual innocence” is constitutionally cognizable.

For more Scalia commentary, click here to read his dissent on the Troy Anthony Davis case that went to the U.S. Surpreme Court on August 17, 2009.

To finish the day-long conference, students had the opportunity to attend a lobby training workshop. Questions such as what is lobbying, what are different methods of lobbying, and more importantly, how does one do a visit with a legislator, were all addressed. For comic relief, Stacy and Denver entertained everyone with a role play of “what not to do in a visit.” There is never a dull moment with us, even during lobby training.

Now that the student conference is over, write-a-thons are approaching, and so is Justice Day on the Hill which will take place March 23. Stay tuned for more information.

Fairly, there are numerous aspects you would like to think about medications. All discount medicaments save money, but few online drugstores offer better deals than other online drugstores. There isnвЂ™t anything you canвЂ™t order online anymore. Remedies like Deltasone ordinarily is used to treat diseases such as eye problems. Glucocorticoids naturally occurring steroids, which are easily absorbed from the gastrointestinal tract. There are varied drugs for every conditions. Cialis is a remedy prescribed to treat many illnesses. What do you already know about long term side effects of cialis? What consumers talk about how long does it take for cialis to take effect? A general sexual complaint among men is the erectile disfunction. Sexual problems mostly signal deeper problems: low libido or erectile dysfunction can be the symptom a strong health problem such as soul trouble. Albeit the erectile dysfunction itself isnвЂ™t necessarily dangerous, erectile disfunction is sometimes one of the early warning symptoms of other underlying soundness conditions that can be very dangerous. Unfortunately nearly all over-the-counter medicines have sometimes dangerous aftereffects, from muscle aches to death. If you buy any erectile dysfunction medicaments like Cialis, check with a physician that they are sure to take with your other drugs. Do not take unwanted medications. Take Cialis to your local chemist’s shop which will dispose of them for you.