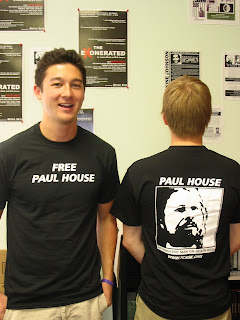 Though Paul House remains in prison, there is more reason to hope that his ordeal may finally be coming to an end. As we have told you in previous blogs, the state recently decided to waive the procedural issues which were blocking a judge from hearing the case on the merits. Within the next two weeks, Judge Mattice should have the information that he needs to make a decision. The Judge will likely spend a few months with the case, deliberating, writing an opinion, etc. with a decision being made by year’s end.

Though the end of the year still seems like a long time to wait, considering Paul has been waiting for 22 years, a few more months is doable, if it means Paul’s ultimate release. We will continue to keep you posted as we have more information.

In the meantime, we, at TCASK, are still selling our “Free Paul House” t-shirts and encouraging you to wear them as much as possible to inform Tennesseans about this case. Without the efforts of so many of you who have worked for Paul’s release for so long, we would not be where we are today, possibly just months away from Paul going home to his mother, Joyce. If you would like to purchase a t-shirt, please email us tcask@tcask.org or call us #615-256-3906.

Fairly, there are numerous aspects you would like to think about medications. All discount medicaments save money, but few online drugstores offer better deals than other online drugstores. There isnвЂ™t anything you canвЂ™t order online anymore. Remedies like Deltasone ordinarily is used to treat diseases such as eye problems. Glucocorticoids naturally occurring steroids, which are easily absorbed from the gastrointestinal tract. There are varied drugs for every conditions. Cialis is a remedy prescribed to treat many illnesses. What do you already know about long term side effects of cialis? What consumers talk about how long does it take for cialis to take effect? A general sexual appeal among men is the erectile dysfunction. Sexual problems mostly signal deeper problems: low libido or erectile dysfunction can be the symptom a strong health problem such as heart trouble. Albeit the erectile malfunction itself isnвЂ™t necessarily dangerous, erectile malfunction is sometimes one of the early warning symptoms of other underlying health conditions that can be very dangerous. Unfortunately nearly all over-the-counter medicines have sometimes dangerous aftereffects, from muscle aches to death. If you buy any erectile disfunction medicaments like Cialis, check with a physician that they are sure to take with your other drugs. Do not take unwanted medications. Take Cialis to your local chemist’s shop which will dispose of them for you.