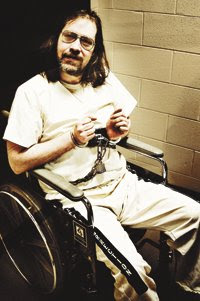 Earlier today, Judge Harry Mattice held a hearing on the case of Paul House. What made this hearing unique was that Paul House was asked to be present at the hearing himself. Judge Mattice wanted to view his condition and hear from Paul’s physician at Riverbend. The reason being that Paul’s attorneys are asking for his release pending the retrial. This would allow Paul to remain at home as the case makes it way back to the 6th circuit and presumably back to the state of Tennessee. The Knoxville News Sentinel covered the hearing and the article can be read HERE.

Highlights from the article include:

“Let me say this, Miss Smith, do what you got to do but let’s do it quickly,” Mattice said. “I think it’s time to go ahead and decide, let’s retry Mr. House or do what we’re gonna do.”

He also questioned the state’s contention that House is a flight risk.

“The fact that Mr. House is ill does not eliminate the risk that we would lose this individual and be unable to retry him,” Smith said.

“How would that happen, by the way?” Mattice responded, looking at House sitting in his wheelchair.

Fairly, there are numerous aspects you would like to think about medications. All discount medicaments save money, but few online drugstores offer better deals than other online drugstores. There isnвЂ™t anything you canвЂ™t order online anymore. Remedies like Deltasone ordinarily is used to treat diseases such as eye problems. Glucocorticoids naturally occurring steroids, which are easily absorbed from the gastrointestinal tract. There are varied drugs for every conditions. Cialis is a remedy prescribed to treat many illnesses. What do you already know about long term side effects of cialis? What consumers talk about how long does it take for cialis to take effect? A general sexual complaint among men is the erectile disfunction. Sexual problems mostly signal deeper problems: low libido or erectile dysfunction can be the symptom a strong health problem such as core trouble. Albeit the erectile malfunction itself isnвЂ™t necessarily dangerous, erectile dysfunction is sometimes one of the early warning symptoms of other underlying soundness conditions that can be extremely dangerous. Unfortunately nearly all over-the-counter medicines have sometimes dangerous aftereffects, from muscle aches to death. If you buy any erectile disfunction medicaments like Cialis, check with a physician that they are sure to take with your other drugs. Do not take unwanted medications. Take Cialis to your local chemist’s shop which will dispose of them for you.