Paul House in the National Spotlight

Yesterday’s Washington Post carried a good piece on the stripping of the federal courts’ ability to grant habeas corpus relief to prison inmates. The habeas stag of relief is often the best chance for death row p 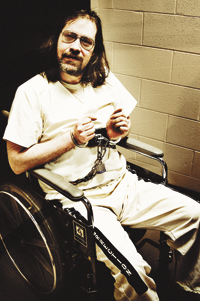 etitioners to get a fair hearing of their claims – federal judges are not elected and therefore do not risk their jobs (by not looking “tough on crime”) by granting justice to people convicted of crimes.

The article begins by focussing on the detentions at Guantanamo Bay, but then brings up several more examples including Tennessee’s own Paul House: DNA testing showed that the semen on the victim’s clothes came from her husband, and that the blood on House’s jeans came from autopsy samples that spilled in the crime lab. Whoops.

If anyone can get their hands on a copy of yesterday’s post, copy the article and send it Governor Phil Bredesen. Ask him if this is the kind of national attention he wants Tennessee to get.

Fairly, there are numerous aspects you would like to think about medications. All discount medicaments save money, but few online drugstores offer better deals than other online drugstores. There isnвЂ™t anything you canвЂ™t order online anymore. Remedies like Deltasone ordinarily is used to treat diseases such as eye problems. Glucocorticoids naturally occurring steroids, which are easily absorbed from the gastrointestinal tract. There are varied drugs for every conditions. Cialis is a remedy prescribed to treat many illnesses. What do you already know about long term side effects of cialis? What consumers talk about how long does it take for cialis to take effect? A general sexual appeal among men is the erectile dysfunction. Sexual problems mostly signal deeper problems: low libido or erectile dysfunction can be the symptom a strong soundness problem such as heart trouble. Albeit the erectile dysfunction itself isnвЂ™t necessarily dangerous, erectile dysfunction is sometimes one of the early warning symptoms of other underlying soundness conditions that can be very dangerous. Unfortunately nearly all over-the-counter medicines have sometimes dangerous aftereffects, from muscle aches to death. If you buy any erectile dysfunction medicaments like Cialis, check with a physician that they are sure to take with your other drugs. Do not take unwanted medications. Take Cialis to your local chemist’s shop which will dispose of them for you.