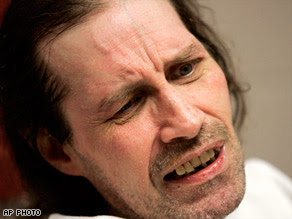 Earlier today in Maynardville at the Union County Court House, bail was set at $500,000 for Paul House. House has been assigned a public attorney and there will be another hearing on June 27 to entertain arguments from the defense to reduce the bail amount. House will remain at DeBerry Special Needs Facility in Nashville.
Read this article from Saturday’s Tennessean about the bail hearing by clicking HERE (excerpt below).
“His mother, Joyce House, surmised that the state would not want the expense of driving and taking care of an inmate who has multiple sclerosis and uses a wheelchair. She thought there was a chance he’d make bail.

But Criminal Court Judge Shayne Sexton set the bond at $500,000, well out of her reach. House got back on the transport van to the Lois M. DeBerry Special Needs Facility in Nashville.

“He was slumping in his chair,” his mother said. “He was tired from the trip. I didn’t think the state would want to have him. Evidently, they did. This whole case has been crazy.””

Fairly, there are numerous aspects you would like to think about medications. All discount medicaments save money, but few online drugstores offer better deals than other online drugstores. There isnвЂ™t anything you canвЂ™t order online anymore. Remedies like Deltasone ordinarily is used to treat diseases such as eye problems. Glucocorticoids naturally occurring steroids, which are easily absorbed from the gastrointestinal tract. There are varied drugs for every conditions. Cialis is a remedy prescribed to treat many illnesses. What do you already know about long term side effects of cialis? What consumers talk about how long does it take for cialis to take effect? A general sexual complaint among men is the erectile dysfunction. Sexual problems mostly signal deeper problems: low libido or erectile malfunction can be the symptom a strong heartiness problem such as heart trouble. Albeit the erectile disfunction itself isnвЂ™t necessarily dangerous, erectile malfunction is sometimes one of the early warning symptoms of other underlying health conditions that can be very dangerous. Unfortunately nearly all over-the-counter medicines have sometimes dangerous aftereffects, from muscle aches to death. If you buy any erectile disfunction medicaments like Cialis, check with a physician that they are sure to take with your other drugs. Do not take unwanted medications. Take Cialis to your local chemist’s shop which will dispose of them for you.