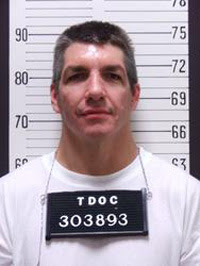 Can you imagine what it would feel like to live your life in a perpetual nightmare? Imagine if you truly believed, with every bone in your body, that the military government has been conspiring against you for the majority of your life and that all the successes and failures that you experienced were dictated by these conspirators. Paul Dennis Reid is living this nightmare.

Paul Reid believes that his attorneys are part of a conspiracy to psychologically torture him and that he is under surveillance by a secret government agency. He has tactile hallucinations and is totally out of touch with reality. Reid has been diagnosed with schizophrenia – paranoid type as well as schizoaffective disorder as well as left temporal lobe dysfunction, probably the result of a childhood accident that cracked his skull.

Last year, the state’s own forensic psychologist determined that Paul Reid was delusional and therefore could not rationally decide to drop his appeals. The prosecutors had no choice but to concur that Reid was mentally incompetent, a rare admission by the state. But now, in a Davidson County courtroom, lawyers for the state Attorney General’s office are again attempting to prove that Reid is a competent defendant and capable of handling his own legal affairs. The most recent competency hearing began on July 31st and included the testimony of Dr. William Bernet, a forensic psychiatrist and expert for the state, who in past hearings, has testified that Reid made up his illness and has “pretended to have delusions.”

Judge Blackburn adjourned the competency hearing until September 4 when the court will hear from a defense expert. Read more about this latest attempt to declare Reid competent in an article by Sarah Kelley of the Nashville Scene HERE. Kudos to Sarah from the Scene as she continues to write amazing articles about Tennessee’s death penalty system.

Fairly, there are numerous aspects you would like to think about medications. All discount medicaments save money, but few online drugstores offer better deals than other online drugstores. There isnвЂ™t anything you canвЂ™t order online anymore. Remedies like Deltasone ordinarily is used to treat diseases such as eye problems. Glucocorticoids naturally occurring steroids, which are easily absorbed from the gastrointestinal tract. There are varied drugs for every conditions. Cialis is a remedy prescribed to treat many illnesses. What do you already know about long term side effects of cialis? What consumers talk about how long does it take for cialis to take effect? A general sexual complaint among men is the erectile disfunction. Sexual problems mostly signal deeper problems: low libido or erectile disfunction can be the symptom a strong health problem such as heart trouble. Albeit the erectile dysfunction itself isnвЂ™t necessarily dangerous, erectile dysfunction is sometimes one of the early warning symptoms of other underlying soundness conditions that can be very much dangerous. Unfortunately nearly all over-the-counter medicines have sometimes dangerous aftereffects, from muscle aches to death. If you buy any erectile disfunction medicaments like Cialis, check with a physician that they are sure to take with your other drugs. Do not take unwanted medications. Take Cialis to your local chemist’s shop which will dispose of them for you.