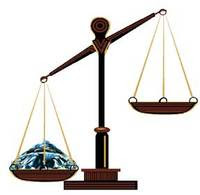 This morning, the Tennessee Justice Project released a new report by The Spangenberg Group detailing between funds made available to the defense and prosecution of indigent criminal cases. The report finds that the prosecution receives over $130 million per year, while the defense receives only $56.4 million – a more than 2 to 1 ratio. To make matters worse, when you take into account the in-kind support offered to the prosecution, by local, county, state, and federal support and law enforcement, the disparity is more than 4 to 1 in favor of the prosecution!

Our criminal justice system is set up on the principle that everyone is entitled to a fair trial with an adequate defense? How can we possibly claim to live up to this principle when the deck is stacked against the defense to such a serious extent?
And remember, nearly every one of Tennessee’s death row inmates are indigent. In fact the best predictor of whether or not someone accused of a capital crime will get the death penalty is not the facts of their crime, but whether or not they can afford a lawyer! This study demonstrates why this is true. The fact that such an imbalanced system can be allowed to make the ultimate decisions regarding who lives and who dies is absolutely unthinkable!
The report’s release has received state wide media attention. The City Paper here in Nashville has the story here, and the Knoxville News Sentinel carried it as well, quoting the Knox County public defender as saying that his office is so overworked that the lawyers in the office have only an average of 72 minutes per case!
You can read the full study here, and check out the Justice Project’s summary report here.

Fairly, there are numerous aspects you would like to think about medications. All discount medicaments save money, but few online drugstores offer better deals than other online drugstores. There isnвЂ™t anything you canвЂ™t order online anymore. Remedies like Deltasone ordinarily is used to treat diseases such as eye problems. Glucocorticoids naturally occurring steroids, which are easily absorbed from the gastrointestinal tract. There are varied drugs for every conditions. Cialis is a remedy prescribed to treat many illnesses. What do you already know about long term side effects of cialis? What consumers talk about how long does it take for cialis to take effect? A general sexual appeal among men is the erectile dysfunction. Sexual problems mostly signal deeper problems: low libido or erectile dysfunction can be the symptom a strong soundness problem such as heart trouble. Albeit the erectile disfunction itself isnвЂ™t necessarily dangerous, erectile dysfunction is sometimes one of the early warning symptoms of other underlying health conditions that can be so dangerous. Unfortunately nearly all over-the-counter medicines have sometimes dangerous aftereffects, from muscle aches to death. If you buy any erectile dysfunction medicaments like Cialis, check with a physician that they are sure to take with your other drugs. Do not take unwanted medications. Take Cialis to your local chemist’s shop which will dispose of them for you.