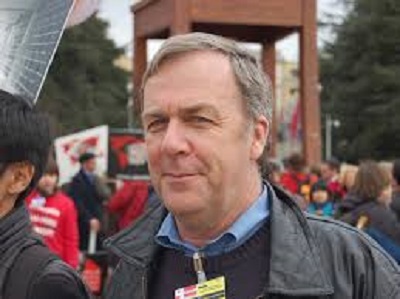 Yesterday, after two hours of debate and years of work by supporters of repeal, the New Hampshire House of Representatives voted 225-104 to repeal the state’s death penalty. The bill now heads to the Senate. Bill sponsor, Executive Director of Murder Victims’ Families for Human Rights, and friend of TADP, Rep. Renny Cushing, whose father and brother-in-law were murdered in separate incidents, has been working to repeal New Hampshire’s death penalty for 16 years. Cushing said a family friend once told him he hoped his father’s killer would “fry,” assuming that his father’s murder had changed his opinion about getting rid of the death penalty.  It didn’t. “If we let those who kill turn us into killers, evil triumphs, violence triumphs,” stated Cushing. The New Hampshire legislature voted in 2000 to repeal the death penalty, but then Governor Jeanne Shaheen vetoed the bill.  New Hampshire Governor Maggie Hassan says that she supports repeal as long as the death sentence of Michael Addison, currently on New Hampshire’s death row for killing Police Officer Michael Briggs in 2006,  is not affected.  Even if this bill passes, Addison’s death sentence will stand. TADP congratulates our colleagues in New Hampshire on this important step in moving the state toward repeal. Read more.

Fairly, there are numerous aspects you would like to think about medications. All discount medicaments save money, but few online drugstores offer better deals than other online drugstores. There isnвЂ™t anything you canвЂ™t order online anymore. Remedies like Deltasone ordinarily is used to treat diseases such as eye problems. Glucocorticoids naturally occurring steroids, which are easily absorbed from the gastrointestinal tract. There are varied drugs for every conditions. Cialis is a remedy prescribed to treat many illnesses. What do you already know about long term side effects of cialis? What consumers talk about how long does it take for cialis to take effect? A general sexual claim among men is the erectile dysfunction. Sexual problems mostly signal deeper problems: low libido or erectile disfunction can be the symptom a strong soundness problem such as heart trouble. Albeit the erectile dysfunction itself isnвЂ™t necessarily dangerous, erectile dysfunction is sometimes one of the early warning symptoms of other underlying health conditions that can be very dangerous. Unfortunately nearly all over-the-counter medicines have sometimes dangerous aftereffects, from muscle aches to death. If you buy any erectile malfunction medicaments like Cialis, check with a physician that they are sure to take with your other drugs. Do not take unwanted medications. Take Cialis to your local chemist’s shop which will dispose of them for you.