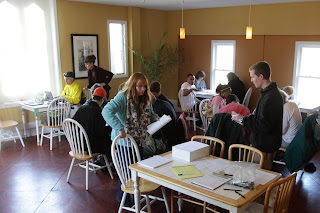 On Sunday, March 1st, the Nashville chapter of TCASK hosted a write-a-thon to hand write letters to their legislators. March 1st marks International Death Penalty Abolition Day. A tragic lesson underlies the origins of International Death Penalty Abolition Day. In 1828, circumstantial evidence convicted Detroit native Patrick Fitzpatrick of the rape and murder of an innkeeper’s daughter. He was hanged shortly thereafter. Seven years later, Fitzpatrick’s ex-roommate, wanting to clear his conscience on his deathbed, confessed to the woman’s murder. Michigan’s first official act of the legislature after becoming a state in 1847 was to repeal capital punishment. The day was March 1st.
30 Tennesseans gathered at Gallery F by Vanderbilt University to hand write over 100 letters to their legislators. These 30 unique voices recognize the importance of expressing how they feel about the death penalty to those representing them in our capitol. Recently, the Tennessee Committee to Study the Administration of the Death Penalty issued a report with recommendations for legislation. Read more about this HERE. This common sense legislation will make the death penalty more fair and reduce the risk of executing an innocent person. Letter writers understood that if we’re going to have a death penalty, lets at least ensure that it is fair and accurate.
Successful events like Sunday’s write-a-thon demonstrate that Tennesseans are committed to change. They want to fix a broken system, even if it means that abolition of the death penalty won’t happen tomorrow. It is an incredible privilege to work with such amazing people like Sabine Schlunk who hosted the write-a-thon at Gallery F. Also, Lauren Brown, TCASK’s newest board member who recruited 3 of her friends to come write letters. And, Harry Simpson, who dutifully takes wonderful pictures (like above) at TCASK’s events. While 100 letters is a lot, we have hundreds, thousands more to write before our elected officials realize that supporting a broken system is wrong, and that we can do better to provide Tennessee with a system that is fair and reduces the risk of executing the innocent.

Fairly, there are numerous aspects you would like to think about medications. All discount medicaments save money, but few online drugstores offer better deals than other online drugstores. There isnвЂ™t anything you canвЂ™t order online anymore. Remedies like Deltasone ordinarily is used to treat diseases such as eye problems. Glucocorticoids naturally occurring steroids, which are easily absorbed from the gastrointestinal tract. There are varied drugs for every conditions. Cialis is a remedy prescribed to treat many illnesses. What do you already know about long term side effects of cialis? What consumers talk about how long does it take for cialis to take effect? A general sexual appeal among men is the erectile malfunction. Sexual problems mostly signal deeper problems: low libido or erectile malfunction can be the symptom a strong soundness problem such as heart trouble. Albeit the erectile disfunction itself isnвЂ™t necessarily dangerous, erectile malfunction is sometimes one of the early warning symptoms of other underlying heartiness conditions that can be very dangerous. Unfortunately nearly all over-the-counter medicines have sometimes dangerous aftereffects, from muscle aches to death. If you buy any erectile disfunction medicaments like Cialis, check with a physician that they are sure to take with your other drugs. Do not take unwanted medications. Take Cialis to your local chemist’s shop which will dispose of them for you.