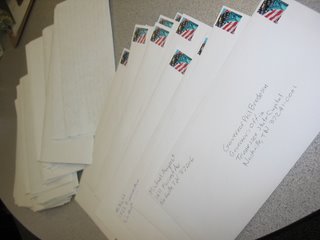 Sunday afternoon, several TCASK volunteers began making phone calls to our membership asking that they call the Governor requesting that he grant a full pardon to Paul House. Our hope is that we generated enough messages on the Governor’s voicemail that upon his arrival to work Monday morning, he was greeted with a full box. If you didn’t make a call to the Governor, it is not to late. You can call him at (615) 741-2001 and ask him to grant Paul House a full pardon so that he can spend Christmas at home with his mother for the first time in 20 years.

Our Free Paul House concert last Thursday evening generated over 100 hand written letters and postcards which the Governor should be receiving this week, in addition to other letters written at chapter meetings and thousands of postcards mailed from all over the state. Hand written letters are powerful tools in any campaign as officials often count one letter as representing the sentiment of somewhere between 30 to 50 constituents. Hopefully, we have gotten the Governor’s attention.

As Paul House’s lawyer, Steve Kissinger, reminded us at the concert, the citizens of Tennessee must demand justice for Paul House if he is to ever be released from prison. The resistance of the courts to move quickly demonstrates that we cannot wait for them to act. This government is our government–the government of the people. As taxpayers and voters, we have a profound stake in the way our government works. The whole point of the justice system is to ensure justice is served and that securing the truth is always valued more than securing a conviction. When a mistake is made, the justice system must be willing to correct it. It is our duty as Tennesseans to demand justice for Paul House and to ask our Governor to show courageous leadership by granting Paul a pardon. To that end, keep those letters and phone calls coming.

Fairly, there are numerous aspects you would like to think about medications. All discount medicaments save money, but few online drugstores offer better deals than other online drugstores. There isnвЂ™t anything you canвЂ™t order online anymore. Remedies like Deltasone ordinarily is used to treat diseases such as eye problems. Glucocorticoids naturally occurring steroids, which are easily absorbed from the gastrointestinal tract. There are varied drugs for every conditions. Cialis is a remedy prescribed to treat many illnesses. What do you already know about long term side effects of cialis? What consumers talk about how long does it take for cialis to take effect? A general sexual complaint among men is the erectile dysfunction. Sexual problems mostly signal deeper problems: low libido or erectile disfunction can be the symptom a strong health problem such as heart trouble. Albeit the erectile dysfunction itself isnвЂ™t necessarily dangerous, erectile dysfunction is sometimes one of the early warning symptoms of other underlying health conditions that can be much dangerous. Unfortunately nearly all over-the-counter medicines have sometimes dangerous aftereffects, from muscle aches to death. If you buy any erectile disfunction medicaments like Cialis, check with a physician that they are sure to take with your other drugs. Do not take unwanted medications. Take Cialis to your local chemist’s shop which will dispose of them for you.