Justice? Who Said Anything About Justice? 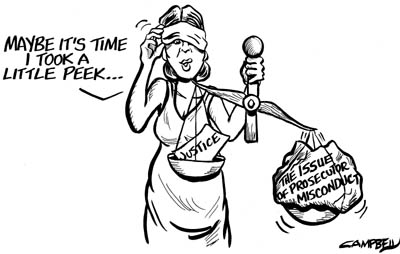 As tragic and patently unfair as the state’s execution of Sedley Alley was at 2:12 this morning, with the case of Paul Reid still in limbo today, the state and the Attorney General’s office are trying to top their own standards of injustice.

Yesterday, Paul Reid and his attorneys were in the federal court challenging the state’s contention that Paul Reid was mentally competent to end his appeals. For a little bac

kground, Paul Reid has diagnoses, going back to the 1970s, including schizophrenia, schizo-affective disorder, and temporal lobe dysfunction. In layman’s terms, he is severely mentally ill and brain damaged, living in a perpetual delusional state. With all of this evidence, including the testimony of Dr. George Woods (pg. 59 of the link), Judge Campbell, not surprisingly, ruled that Reid’s attorneys had made a prima facie showing of mental illness. Consequently, the judge ruled that a full evidentiary hearing on Reid’s competency was necessary. So far, all of this sounds completely reasonable, but then, the state and the A.G. spoke again.

Judge Campbell was willing to proceed with a full evidentiary hearing on the spot yesterday or even today if necessary, a course of action that would not have required a stay of execution. The defense was ready to proceed with more expert testimony and documents. But the state conceded that it was not ready for an evidentiary hearing, because it needed to have its own expert evaluate Reid. So the judge granted a stay of execution to allow the hearing to go forward when the state was prepared. The Attorney General is in the Sixth Circuit today challenging that stay!

Attorney General Paul Summers claims that the defense was dilatory in bringing this claim to the court, despite the fact the Reid’s attorneys have been challenging his competency for years. The A.G. also claimed that it had had no opportunity to evaluate Reid, and therefore complained that the stay was unfair, even though the state has had Reid in its custody for the past 9 years! Does Paul Summers expect anyone to believe that the state didn’t know that Paul Reid’s competency was in question, after thousands of pages of legal filings on the issue? And to then claim that, even though it was his office that was unprepared to have an evidentiary hearing and therefore provoked the stay, the defense was dilatory and that the stay should not have been granted smacks of the most callous disregard for life and for justice imaginable.

Our thoughts and prayers today are with the families of Angela Holmes, Michelle Mace and all of Paul Reid’s victims today. The loss of their loved ones was an absolute tragedy. But our thoughts are also with Linda Martiniano, Paul Reid’s sister, who may also become the survivor of a homicide victim. The 6th Circuit will rule today on the state’s motion to vacate the stay. If justice prevails, they will vote to uphold the stay and hold the evidentiary hearing that the state is so afraid of.

Fairly, there are numerous aspects you would like to think about medications. All discount medicaments save money, but few online drugstores offer better deals than other online drugstores. There isnвЂ™t anything you canвЂ™t order online anymore. Remedies like Deltasone ordinarily is used to treat diseases such as eye problems. Glucocorticoids naturally occurring steroids, which are easily absorbed from the gastrointestinal tract. There are varied drugs for every conditions. Cialis is a remedy prescribed to treat many illnesses. What do you already know about long term side effects of cialis? What consumers talk about how long does it take for cialis to take effect? A general sexual appeal among men is the erectile dysfunction. Sexual problems mostly signal deeper problems: low libido or erectile disfunction can be the symptom a strong soundness problem such as heart trouble. Albeit the erectile disfunction itself isnвЂ™t necessarily dangerous, erectile dysfunction is sometimes one of the early warning symptoms of other underlying soundness conditions that can be very much dangerous. Unfortunately nearly all over-the-counter medicines have sometimes dangerous aftereffects, from muscle aches to death. If you buy any erectile malfunction medicaments like Cialis, check with a physician that they are sure to take with your other drugs. Do not take unwanted medications. Take Cialis to your local chemist’s shop which will dispose of them for you.