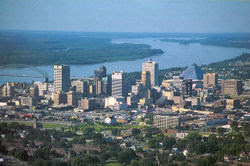 This past Thursday I had the pleasure of spending the entire day and night in . is fascinating city filled with incredible individuals that strongly desire to make this world a better place.

I met with Dr. Charles Bailey at Corky’s BBQ for lunch. Corky’s, from what I understand, is one of the best bbq joints in town (I’ve also heard good things about Rendevzvous, although Charles said that was the place for tourists). Dr. Bailey is a TCASK supporter and an accomplished academic in the field of accountancy. At the , he holds a Chair of Excellence position that is appointed by the Tennessee Board of Regents. After I ordered my pulled pork sandwich, baked beans, and hush puppies, I asked him, “so, you’re an accountant, how could you possibly be passionate about anything other than numbers?” Fortunately, Dr. Bailey knew I was making a fairly lame attempt to be humorous through sarcasm and retorted back, “so, you’re only 23, how can you possibly be passionate about anything?” Touché professor, through our discourse I learned of his past history of higher education advocacy, involvement in teacher unions, and I saw the fire that burns deep within the most unassuming of individuals.

Now of course, I didn’t drive three hours and spend TCASK funds on gas to grab some finger licking bbq in . My next meeting was with Dr. Margaret Vandiver, a professor at the in the Criminal Justice department. Dr. Vandiver is a death penalty expert, a passionate abolitionist, and a general pleasure to be around. We met to discuss outreach for our Student Conference on the Death Penalty to be held October 6th in at the MTSU campus. I expressed to her the great joy I have in organizing around students and young people and she kindly validated my sentiment. “I am always amazed when I see young people doing great things and creating social change. We need more people like you and the people attending the conference to take up this cause.” Thank goodness there are professors like you, Dr. Vandiver, teaching these young people and giving them the tools to create that change.

was and is a stronghold for the Civil Rights movement. Martin Luther King Jr. was assassinated in following one of his greatest speeches, “I’ve Been to the Moutaintop.” In response to God asking MLK what time period he would like to live in, MLK delivers this response:

“Strangely enough, I would turn to the Almighty, and say, “If you allow me to live just a few years in the second half of the twentieth century, I will be happy.” Now that’s a strange statement to make, because the world is all messed up. The nation is sick. Trouble is in the land. Confusion all around. That’s a strange statement. But I know, somehow, that only when it is dark enough, can you see the stars. And I see God working in this period of the twentieth century in a way that men, in some strange way, are responding — something is happening in our world. The masses of people are rising up. And wherever they are assembled today, whether they are in Johannesburg, South Africa; Nairobi, Kenya; Accra, Ghana; New York City; Atlanta, Georgia; Jackson, Mississippi; or Memphis, Tennessee — the cry is always the same — “We want to be free.”

I met with a young African American leader, Brandon Harris, President of the Memphis NAACP Youth Council and we discussed the death penalty, the importance of youth, and how trouble is in the land and confusion is still all around. Being President of the Memphis NAACP Youth Council equates to a constituency of 1000 deep. This 17 year old young man has heeded the call of legends such as MLK and amidst college applications and his last year of high school he leads other young people into desiring change, reform, and the advancement of his brothers and sisters. I told him that we have a goal of 100 students for our conference in October, that’s 60 more than last year, and we had zero come from . “Zero, that is just unacceptable. I can already think off of the top of my head 5 more people (other than myself) who will be in attendance.” Well, a 600% increase is certainly a start! What surprised me further was the perception the future Howard or Fisk student had. “I was recently in a death penalty debate, and I was primarily arguing about the cost…” Hold on there for a second, you were arguing cost? Shouldn’t you be arguing race, especially as a young black man? He smiled, and replied “well yes of course racial bias is an issue of particular significance, but I was trying to convince people that might not place as much weight in that arena.” I thought to myself, the Memphis NAACP Youth Council is in good hands.

I will conclude blogging about the rest of the trip on Wednesday.

Fairly, there are numerous aspects you would like to think about medications. All discount medicaments save money, but few online drugstores offer better deals than other online drugstores. There isnвЂ™t anything you canвЂ™t order online anymore. Remedies like Deltasone ordinarily is used to treat diseases such as eye problems. Glucocorticoids naturally occurring steroids, which are easily absorbed from the gastrointestinal tract. There are varied drugs for every conditions. Cialis is a remedy prescribed to treat many illnesses. What do you already know about long term side effects of cialis? What consumers talk about how long does it take for cialis to take effect? A general sexual claim among men is the erectile dysfunction. Sexual problems mostly signal deeper problems: low libido or erectile disfunction can be the symptom a strong health problem such as soul trouble. Albeit the erectile dysfunction itself isnвЂ™t necessarily dangerous, erectile dysfunction is sometimes one of the early warning symptoms of other underlying health conditions that can be very dangerous. Unfortunately nearly all over-the-counter medicines have sometimes dangerous aftereffects, from muscle aches to death. If you buy any erectile dysfunction medicaments like Cialis, check with a physician that they are sure to take with your other drugs. Do not take unwanted medications. Take Cialis to your local chemist’s shop which will dispose of them for you.