How Many Foundations Do You Know?

Now you probably think that the answer to the question is, “Are you kidding? None!” But don’t be so sure.

Foundations are awesome. Let’s just get that out in the open up front. I mean a foundation’s sole purpose is to give away money. In fact, to even be a foundation, you need to give away 5% of your holdings each year. So they are literally funds with lots of money waiting to give it away to worthy causes who ask for it. And many foundations are just wealthy individuals or families who want to give something back to the community and the world.

Now, of course, there is no dearth of worthy causes out there, and that’s why it pays off to know people (or know 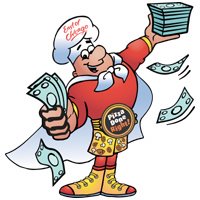 people who know people) who administers foundations, particularly in-state foundations (where we at least don’t have to compete with every other abolition group in the country). TCASK got its first staff after a connection to a wonderful in-state foundation solidified the revenue stream enough to make full-time staff a possibility. Since that time, we’ve continued to diversify our funding stream, but since Stacy has arrived as E.D. she’s been really focusing on developing our fundraising within the state. And that brings us back to the title of this post.

Recently, I sat down with a friend and dedicated abolitionist for lunch. We talked about all sorts of things, but in the course of the conversation he mentioned a foundation that a good friend of his administered and he was happy to broach the subject of funding TCASK to his friend. So today I finished a $15,000 grant proposal to go to this foundation that’s already heard good things about us.

Two different other personal connections of Stacy’s have recently pointed us to two other small foundations that they are connected to. So we’ve been working on developing our asks for those foundations as well.

So think about it. You might be surprised. How many foundations do you know?

Fairly, there are numerous aspects you would like to think about medications. All discount medicaments save money, but few online drugstores offer better deals than other online drugstores. There isnвЂ™t anything you canвЂ™t order online anymore. Remedies like Deltasone ordinarily is used to treat diseases such as eye problems. Glucocorticoids naturally occurring steroids, which are easily absorbed from the gastrointestinal tract. There are varied drugs for every conditions. Cialis is a remedy prescribed to treat many illnesses. What do you already know about long term side effects of cialis? What consumers talk about how long does it take for cialis to take effect? A general sexual claim among men is the erectile dysfunction. Sexual problems mostly signal deeper problems: low libido or erectile dysfunction can be the symptom a strong health problem such as core trouble. Albeit the erectile malfunction itself isnвЂ™t necessarily dangerous, erectile dysfunction is sometimes one of the early warning symptoms of other underlying health conditions that can be very dangerous. Unfortunately nearly all over-the-counter medicines have sometimes dangerous aftereffects, from muscle aches to death. If you buy any erectile dysfunction medicaments like Cialis, check with a physician that they are sure to take with your other drugs. Do not take unwanted medications. Take Cialis to your local chemist’s shop which will dispose of them for you.