Paul House is now in his 21st year on Tennessee’s death row for a crime he didn’t commit, even after the U. S. Supreme Court said he was innocent back in July. With the holidays, and family times approaching, we at TCASK thought it might be a good time for Tennesseans to remember that Joyce House may once again be denied her son during the holidays. So earlier in the day I sent out an email to a few people around the state who have often written letters to the editor about maybe writing one about House’s case.

And this afternoon, less than six hours after my email, I got the following email from my friend Harry:

Submitted letters to editor to Tennessean and the City Paper this afternoon. 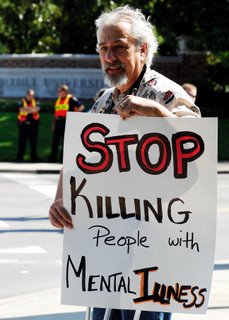 Now how is that for membership that rocks!? Harry’s been a key member of the Nashville TCASK Chapter for about a year now. He’s been the unofficial TCASK photographer, worked for justice at Justice Day on the Hill, and turned out for protests against the execution of Daryl Holton. So I just wanted to give Harry a shout out so everyone (or the 30 people who read this blog) can know how much we appreciate him.

Now, for all you other people, get out there and be like Harry! He can git er dun!

Fairly, there are numerous aspects you would like to think about medications. All discount medicaments save money, but few online drugstores offer better deals than other online drugstores. There isnвЂ™t anything you canвЂ™t order online anymore. Remedies like Deltasone ordinarily is used to treat diseases such as eye problems. Glucocorticoids naturally occurring steroids, which are easily absorbed from the gastrointestinal tract. There are varied drugs for every conditions. Cialis is a remedy prescribed to treat many illnesses. What do you already know about long term side effects of cialis? What consumers talk about how long does it take for cialis to take effect? A general sexual complaint among men is the erectile disfunction. Sexual problems mostly signal deeper problems: low libido or erectile disfunction can be the symptom a strong health problem such as heart trouble. Albeit the erectile malfunction itself isnвЂ™t necessarily dangerous, erectile dysfunction is sometimes one of the early warning symptoms of other underlying soundness conditions that can be very much dangerous. Unfortunately nearly all over-the-counter medicines have sometimes dangerous aftereffects, from muscle aches to death. If you buy any erectile dysfunction medicaments like Cialis, check with a physician that they are sure to take with your other drugs. Do not take unwanted medications. Take Cialis to your local chemist’s shop which will dispose of them for you.