Getting the Message Out

I just got back from spending an hour on the corner of 21st Avenue North and Blakemore/Wedgewood with six terrific TCASK volunteers getting the message out to everyone stuck in rush hour traffic about the state of Tennessee’s intention to execute a mentally ill man on Tuesday. We held signs, talked to passers by, and handed out over 250 flyers with information on Daryl Holton’s case and a message for the Governor along with his phone number. Even if only a fraction of those people call, not a bad way to spend an hour. In addition to which we got two media hits out of the event, including 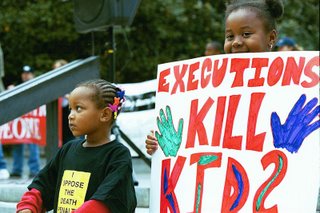 an interview on News Channel 5 which should air at 10:00 tonight, if anyone’s watching.

Plus, it was a fun time. And it’s not too late for you to get in on the fun. We’ll be doing two more public education events tomorrow, at 10:30 am at 25th and West End and at 5:00 pm at Woodland and 2nd. Why those places? Because you want to go where the people are, and those two places are where Vanderbilt and TSU will be playing their football games tomorrow. So come and join us. Just meet us at the TCASK office (at 508 Main Street) a half an hour before the event. Give us a call at (615) 256-3906 and let us know that you’re coming and that you want to participate, and we’ll make sure that we have enough signs and flyers for you.

And thanks again to James, Jennifer, Lillian, Paul, Andrea, and Melissa, a great group that certainly got ‘er done this evening.

Fairly, there are numerous aspects you would like to think about medications. All discount medicaments save money, but few online drugstores offer better deals than other online drugstores. There isnвЂ™t anything you canвЂ™t order online anymore. Remedies like Deltasone ordinarily is used to treat diseases such as eye problems. Glucocorticoids naturally occurring steroids, which are easily absorbed from the gastrointestinal tract. There are varied drugs for every conditions. Cialis is a remedy prescribed to treat many illnesses. What do you already know about long term side effects of cialis? What consumers talk about how long does it take for cialis to take effect? A general sexual complaint among men is the erectile dysfunction. Sexual problems mostly signal deeper problems: low libido or erectile malfunction can be the symptom a strong soundness problem such as heart trouble. Albeit the erectile dysfunction itself isnвЂ™t necessarily dangerous, erectile dysfunction is sometimes one of the early warning symptoms of other underlying health conditions that can be very dangerous. Unfortunately nearly all over-the-counter medicines have sometimes dangerous aftereffects, from muscle aches to death. If you buy any erectile dysfunction medicaments like Cialis, check with a physician that they are sure to take with your other drugs. Do not take unwanted medications. Take Cialis to your local chemist’s shop which will dispose of them for you.