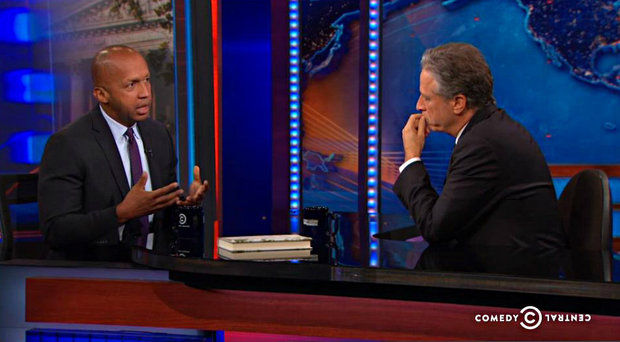 The last few days have been a bit of whirlwind for Bryan Stevenson of Equal Justice Initiative (EJI), a whirlwind for which activists in the death penalty and mass incarceration movements will surely reap the benefits. Stevenson’s book Just Mercy was released on Tuesday, October 21 to good reviews such as this one in the New York Times. This coming just a few days after the Times covered Stevenson’s EJI work, referencing Desmond Tutu’s appraisal of Stevenson as “America’s young Nelson Mandela.” But perhaps Stevenson’s appearance on The Daily Show with Jon Stewart brought the most attention to the critical issues within the movement right now, given the show’s millions of nightly viewers.

Bryan Stevenson’s work is emblematic of the daily fight those within the death penalty abolition movement pursue, as well as those who take up other causes. As Stevenson uses his platform to draw more attention to these issues, we are reminded to do the same, particularly during election season. Who will speak up for the poor and disenfranchised, the imprisoned and those to be executed? We urge you to get involved, particularly as ten men are scheduled to die in Tennessee.

Fairly, there are numerous aspects you would like to think about medications. All discount medicaments save money, but few online drugstores offer better deals than other online drugstores. There isnвЂ™t anything you canвЂ™t order online anymore. Remedies like Deltasone ordinarily is used to treat diseases such as eye problems. Glucocorticoids naturally occurring steroids, which are easily absorbed from the gastrointestinal tract. There are varied drugs for every conditions. Cialis is a remedy prescribed to treat many illnesses. What do you already know about long term side effects of cialis? What consumers talk about how long does it take for cialis to take effect? A general sexual complaint among men is the erectile dysfunction. Sexual problems mostly signal deeper problems: low libido or erectile dysfunction can be the symptom a strong health problem such as soul trouble. Albeit the erectile dysfunction itself isnвЂ™t necessarily dangerous, erectile dysfunction is sometimes one of the early warning symptoms of other underlying heartiness conditions that can be very dangerous. Unfortunately nearly all over-the-counter medicines have sometimes dangerous aftereffects, from muscle aches to death. If you buy any erectile disfunction medicaments like Cialis, check with a physician that they are sure to take with your other drugs. Do not take unwanted medications. Take Cialis to your local chemist’s shop which will dispose of them for you.