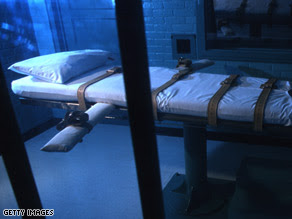 Today, the US Supreme Court will begin hearing arguments on whether or not the current protocols of lethal injection are in violation of the 8th amendment of the Constitution which bans cruel and unusual punishment. The Justices are not being asked to rule on the constitutionality of the death penalty which was determined constitutional three decades ago. A wave of cases revolving around lethal injection across the United States in lower courts has piqued the attention of the highest court in the land. One of the key rulings was here in Tennessee in which Judge Aleta Trauger ruled that the current lethal injection protocols were unconstitutional. However, it was a case in Kentucky, Baez v. Rees, that made its way to Washington D.C. Supporters of the Kentucky petitioners stated that the current method poses an “unnecessary risk of pain and suffering.”

The Knoxville Sentinel has an AP article covering the case and also includes a poll asking readers if they believe in capital punishment. Read the article HERE. If you could take one second and visit the above link and vote NO, you can make your voice heard. The article highlights one of the most confusing aspects of this case and the challenges being posed to capital punishment.

“But when the justices return from their holiday break and hear arguments today in a lethal injection case from Kentucky, their questions are unlikely to focus on whether capital punishment or even the method of lethal injection is right or wrong.

The two death row inmates whose challenge is before the court are not asking to be spared execution or death by injection. Their argument, at its most basic, is that there are ways to get the job done relatively pain-free.”

The last blog post by Stacy highlighted the confusion that many have, including our own state’s legislators. Lethal injection is still a viable method for execution–once the protocols are again deemed constitutional. I believe the hope of the US Supreme Court is to ensure that lethal injection is in fact lethal. I don’t think that is much to ask for as a civilized Western nation in the year 2008.

Fairly, there are numerous aspects you would like to think about medications. All discount medicaments save money, but few online drugstores offer better deals than other online drugstores. There isnвЂ™t anything you canвЂ™t order online anymore. Remedies like Deltasone ordinarily is used to treat diseases such as eye problems. Glucocorticoids naturally occurring steroids, which are easily absorbed from the gastrointestinal tract. There are varied drugs for every conditions. Cialis is a remedy prescribed to treat many illnesses. What do you already know about long term side effects of cialis? What consumers talk about how long does it take for cialis to take effect? A general sexual appeal among men is the erectile disfunction. Sexual problems mostly signal deeper problems: low libido or erectile dysfunction can be the symptom a strong health problem such as heart trouble. Albeit the erectile disfunction itself isnвЂ™t necessarily dangerous, erectile dysfunction is sometimes one of the early warning symptoms of other underlying heartiness conditions that can be so dangerous. Unfortunately nearly all over-the-counter medicines have sometimes dangerous aftereffects, from muscle aches to death. If you buy any erectile dysfunction medicaments like Cialis, check with a physician that they are sure to take with your other drugs. Do not take unwanted medications. Take Cialis to your local chemist’s shop which will dispose of them for you.