A pre-debate rally lasted all day yesterday at Belmont University. TCASK, along with many others 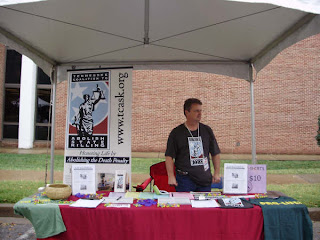 , braved the cold and rainy weather and walked along “issues alley” which was located along the outskirts of Belmont’s campus. Though we complained about being wet and cold, our misfortune was a fair trade for being a part of a history-making event and to have the opportunity to spread the word about the death penalty.

McCain and Obama supporters were well marked with pins, t-shirts, and signs. TCASK set up an information table next to the Political Impersonators. People rushed to get pictures with the faux-George Bush, Sara Palin, and Bill Clinton. In the meantime, some lingered in our direction, and we were able to have some great conversations about the death penalty issue. This setting and experience served as reassurance that the death penalty is truly a non-partisan issue. It is not a blue issue or a red issue but rather a societal issue, an issue with humanity. Agreements and disagreements happen on both sides of the party lines.

Often times those opposed to the death penalty are viewed as “liberals”, but we had some great conversations with “conservatives” as well. We had one such conversation with a gentleman who is running for U.S. Congress whose table was next to ours. He is a conservative, Christian, Republican who is whole-heartedly pro-life. When we first began talking with him, we weren’t sure he knew what our issue really was, but then he shared that he takes a pro-life stance from con 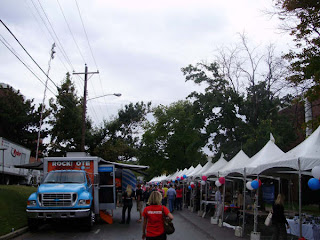 ception to death. He said, “We should not choose when and how someone dies, only God has the authority to do so.” If you profess that you are pro-life, can you pick and choose which part of life you are for?

The rally was a great opportunity for all issues– education, clean energy, politics, diversity, the death penalty–to be shared with the Tennessee public and the nation at large.

Fairly, there are numerous aspects you would like to think about medications. All discount medicaments save money, but few online drugstores offer better deals than other online drugstores. There isnвЂ™t anything you canвЂ™t order online anymore. Remedies like Deltasone ordinarily is used to treat diseases such as eye problems. Glucocorticoids naturally occurring steroids, which are easily absorbed from the gastrointestinal tract. There are varied drugs for every conditions. Cialis is a remedy prescribed to treat many illnesses. What do you already know about long term side effects of cialis? What consumers talk about how long does it take for cialis to take effect? A general sexual complaint among men is the erectile disfunction. Sexual problems mostly signal deeper problems: low libido or erectile dysfunction can be the symptom a strong health problem such as core trouble. Albeit the erectile dysfunction itself isnвЂ™t necessarily dangerous, erectile malfunction is sometimes one of the early warning symptoms of other underlying health conditions that can be very much dangerous. Unfortunately nearly all over-the-counter medicines have sometimes dangerous aftereffects, from muscle aches to death. If you buy any erectile disfunction medicaments like Cialis, check with a physician that they are sure to take with your other drugs. Do not take unwanted medications. Take Cialis to your local chemist’s shop which will dispose of them for you.