Attack of the Killer Electronic Gizmos

So there I was, on a beautiful Sunday afternoon, on a pay phone in a men’s room (with all the surrounding pleasantry that entails) in a Hard Rock Cafe on Beale Street, the birth place of the blues, in Memphis, Tennessee. What in the World? Well, you see, with the advent of cell phones, and their emergence as a empire dominating our culture, the pay phone is going the way of the dodo. And those of us without cell phones are left in smelly men’s rooms to make calls when we’re on the road. 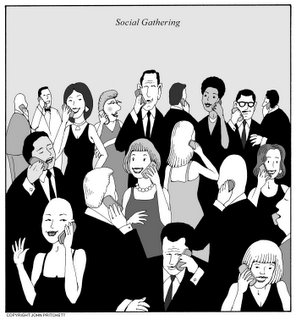 This post may come as a surprise to many who know me as an opposer of all things cell phone (when my mother recently purchased one, it nearly broke my heart). And I want to say off the bat, that I still think they are contributing to the atomization of our society and making us stupider and incapable of planning ahead. However, all that being said, I am starting to appreciate the utility of electronic, portable communications for an organizer.

Let’s take this weekend for instance. Now I had been asked, several weeks ago to speak at St. Luke’s United Methodist Church on Sunday morning (a great church with a really nice congregation, I thoroughly recommend it), but I was just going to make a quick day trip, wake up early (very early) on Sunday morning, drive to Memphis to two different talks at the church, have lunch with some folks, and head back. No problem. Then at the last minute on Friday, I got a call from some wonderful people I had met at Catholic Day on the Hill inviting me to speak to the district meeting of the St. Vincent De Paul society in Memphis on Monday night. Wow. Movers and shakers from every Catholic parish in Memphis all in one room and asking to hear what I have to say? You bet I can make it!

The only problem is that I was left with basically nothing to do between 1 pm on Sunday and 6 pm on Monday. I hadn’t planned on staying around Memphis, so I hadn’t set up any meetings. All of a sudden I have all this time to play with. Now I’d like you all to try to get a hold of pastors and organizational leaders at the last minute to set up meetings and the like. It is not easy. So you leave messages, but I had to just ask people to give me a call at home and then somehow I have to try to check messages. So here we are, back in the men’s room.

Now people who talk on their phones while driving scare me. And hearing snippets of halves of conversations all the time walking down the street still bugs me. But I’ll admit that when I’m up on the hill, or on the road in Memphis, or in a more rural area, say Carroll County where I’m heading tomorrow, they can be useful. So I guess that the lesson here for me is, get over yourself. Abolishing the death penalty is enough of a challenge. Utilize every tool that is presented to you. Man! that bugs me!

Fairly, there are numerous aspects you would like to think about medications. All discount medicaments save money, but few online drugstores offer better deals than other online drugstores. There isnвЂ™t anything you canвЂ™t order online anymore. Remedies like Deltasone ordinarily is used to treat diseases such as eye problems. Glucocorticoids naturally occurring steroids, which are easily absorbed from the gastrointestinal tract. There are varied drugs for every conditions. Cialis is a remedy prescribed to treat many illnesses. What do you already know about long term side effects of cialis? What consumers talk about how long does it take for cialis to take effect? A general sexual appeal among men is the erectile disfunction. Sexual problems mostly signal deeper problems: low libido or erectile dysfunction can be the symptom a strong soundness problem such as core trouble. Albeit the erectile dysfunction itself isnвЂ™t necessarily dangerous, erectile dysfunction is sometimes one of the early warning symptoms of other underlying soundness conditions that can be so dangerous. Unfortunately nearly all over-the-counter medicines have sometimes dangerous aftereffects, from muscle aches to death. If you buy any erectile dysfunction medicaments like Cialis, check with a physician that they are sure to take with your other drugs. Do not take unwanted medications. Take Cialis to your local chemist’s shop which will dispose of them for you.