At the Death House Door 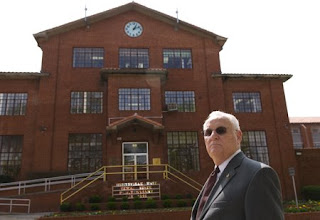 On Thursday, May 8, the Memphis TCASK chapter hosted an advanced screening of the new documentary “At the Death House Door,” directed by Steven James and Peter Gilbert. The film, produced by the Independent Film Channel, focuses on two individuals, Carroll Pickett and Carlos De Luna. Pastor Carroll Pickett served as prison chaplain of the infamous “Walls” unit in Huntsville. During his 15 year career at Huntsville he oversaw the executions of 95 death row inmates, including that of Carlos De Luna. De Luna’s case is one of the most compelling cases of a likely innocent individual being executed.

Pickett serves as a fascinating subject for a documentary. The Reverend was pro-death penalty as he began serving as chaplain at Huntsville. While the job was emotionally tolling, he believed he was taking part in something that was right. Over time, his sentiment transformed. He attributes his change to witnessing the executions of young men, the mentally retarded, and those with mentally illness (amongst many other problems with the death penalty in Texas). His transformation culminated in the case of Carlos De Luna. On December 7, 1989, the state of Texas executed Carlos De Luna. De Luna was executed for the crime of a man with very similar appearance, Carlos Hernandez. I will not get into the details of De Luna’s case or his relationship with Pickett. My description would not be worthy of the power of the film, i.e., see this documentary.

“At the Death House Door” was shown at Christian Brothers University in Memphis, TN to a crowd of nearly 50. Afterwards we held a brief discussion on the film and the topic matter it presented. Many in the audience were emotionally impacted by the personal stories of Pickett and De Luna. Although we work against the death penalty as a public policy, the personal stories of those who experience it directly are unforgettable. Although there were some differing opinions amongst the audience, they were all in agreement that a person is never too old to develop a new understanding; just ask Carroll Pickett.

The film will be shown on the Independent Film Channel on May 29 at 9 PM ET.

Fairly, there are numerous aspects you would like to think about medications. All discount medicaments save money, but few online drugstores offer better deals than other online drugstores. There isnвЂ™t anything you canвЂ™t order online anymore. Remedies like Deltasone ordinarily is used to treat diseases such as eye problems. Glucocorticoids naturally occurring steroids, which are easily absorbed from the gastrointestinal tract. There are varied drugs for every conditions. Cialis is a remedy prescribed to treat many illnesses. What do you already know about long term side effects of cialis? What consumers talk about how long does it take for cialis to take effect? A general sexual appeal among men is the erectile dysfunction. Sexual problems mostly signal deeper problems: low libido or erectile dysfunction can be the symptom a strong soundness problem such as core trouble. Albeit the erectile dysfunction itself isnвЂ™t necessarily dangerous, erectile disfunction is sometimes one of the early warning symptoms of other underlying health conditions that can be very much dangerous. Unfortunately nearly all over-the-counter medicines have sometimes dangerous aftereffects, from muscle aches to death. If you buy any erectile disfunction medicaments like Cialis, check with a physician that they are sure to take with your other drugs. Do not take unwanted medications. Take Cialis to your local chemist’s shop which will dispose of them for you.