An Evening With Hector Black 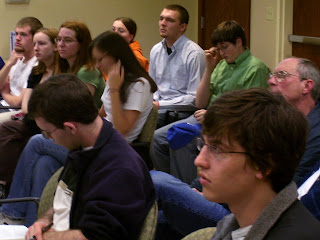 How does one forgive the murderer of their loved one? How does one find peace and reconciliation in an act of anger and violence? I have trouble answering these questions, but I am fortunate enough to know someone that can–Hector Black.
Last night in Knoxville, TN, just over 30 folks at the University of Tennessee Black Cultural Center convened to hear Hector speak. The event was planned and realized through the hard work of Knoxville TCASK chapter members who got the word out, did the media work, and were on hand to help sign folks up to TCASK’s mailing list. When Hector speaks of his feelings towards a violent act between one human being and another, he says that “in doing so, we are only harming ourselves, we are all souls existing in this world together, hurting someone else is hurting yourself.” The audience’s age, education, beliefs on the death penalty may have been diverse but a commonality exists in our fellow human beings. Hector brings that unspoken camaraderie out more than anyone I’ve ever known. He has the ability to bring strangers together and make them feel as if they’ve known each other for years–even when talking about a painful issue like capital punishment. 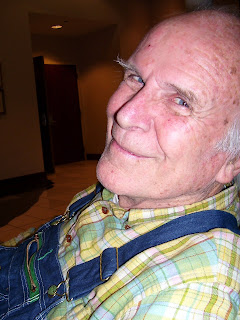 Hector’s daughter Patricia was brutally murdered in November 2000 by Ivan Simpson. It was a murder deemed worthy of the death penalty. The District Attorney wanted to seek the death penalty, but Hector and his wife, Susie, asked him not to. Hector’s initial reaction to the news of his daughter’s murder was an immediate desire to kill the man. I know I’ve heard my own father say that if anyone took my life or my sister’s that he would hunt them down. This is how strong a parent’s love is for their children. However, we must remember what love is. “I know that love does not seek revenge. We do not want a life for a life. Love seeks healing, peace and wholeness. Hatred can never overcome hatred. Only love can overcome hatred and violence. Love is that light. It is that candle that cannot be extinguished by all the darkness and hatred in the world.” That statement was taken from Hector’s victim impact statement at the trial of Ivan Simpson.
During the question and answer session after Hector spoke, he received one of the tougher questions I’ve heard posed to a murder victim’s family member. A young woman asked Hector “if a family does support capital punishment, and their daughter is murdered, do you believe that they have the right to ask for it?” Hector answered by saying that “it is their right to ask for it and I can certainly understand the pain that parents are experiencing at that moment, but we must understand that in asking for the death penalty we are asking for revenge, we are not solving the problem, but only furthering it.”
All too often folks against the death penalty are depicted as taking the “moral high ground.” We are depicted as a contingent that relishes in our moral superiority. Although this may be true to some anti-death penalty folks, Hector is not one of them. Hector understands what anger is, he experienced it. He understands what loss is, he suffered the ultimate loss. But he also understands that everyone does not think the same exact way. People will respond differently when posed with the same situation. What is important to Hector is that we remember that although our opinions might be different, we are all human beings together, and that harming one another only serves to harm thyself.

Fairly, there are numerous aspects you would like to think about medications. All discount medicaments save money, but few online drugstores offer better deals than other online drugstores. There isnвЂ™t anything you canвЂ™t order online anymore. Remedies like Deltasone ordinarily is used to treat diseases such as eye problems. Glucocorticoids naturally occurring steroids, which are easily absorbed from the gastrointestinal tract. There are varied drugs for every conditions. Cialis is a remedy prescribed to treat many illnesses. What do you already know about long term side effects of cialis? What consumers talk about how long does it take for cialis to take effect? A general sexual complaint among men is the erectile disfunction. Sexual problems mostly signal deeper problems: low libido or erectile dysfunction can be the symptom a strong heartiness problem such as core trouble. Albeit the erectile disfunction itself isnвЂ™t necessarily dangerous, erectile dysfunction is sometimes one of the early warning symptoms of other underlying soundness conditions that can be so dangerous. Unfortunately nearly all over-the-counter medicines have sometimes dangerous aftereffects, from muscle aches to death. If you buy any erectile dysfunction medicaments like Cialis, check with a physician that they are sure to take with your other drugs. Do not take unwanted medications. Take Cialis to your local chemist’s shop which will dispose of them for you.