A Tale of Two Cities

Actually, it was two pretty good times, the flip sides of the coin of organizing. It was the driving the length of the state in between the two that was a little less than scintillating. 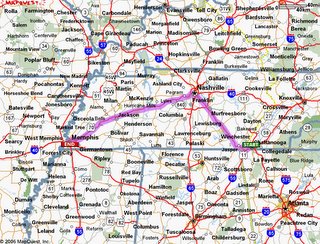 On Monday evening I was in Chattanooga to facilitate the Chattanooga TCASK meeting, and yesterday I was in Memphis to speak at a wonderful church and begin the process of reactivating Memphis. It’s been a busy couple of days, but all the long driving has certainly given me a chance to reflect on the different sides of the organizing work that we do.

Last night’s talk certainly has more glamour. I was invited and fed and got to stand up in front of about 50 people and discourse on the problems in the capital punishment system, the inhumanity of executions, the Gospel’s call to forgiveness, and the need for a moratorium. It was a great audience, ranging in age from about 13 to probably 60 or 70. I was asked a lot of really insightful questions, and just about everyone signed moratorium petitions. Plenty of people asked how they could become more involved. I got lots of hand shakes and thanks afterwards (not to mention offers to stay the night so I wouldn’t have to drive all the way back to Nashville). We even got one spontaneous $100 donation to TCASK!

On Monday night, on the other hand, I sat in the Chattanooga TCASK meeting with 8 people in it. I didn’t give any big speeches (actually maybe you should check with the others who attended on this, since I do tend to run on). There was nothing so “glamorous” in the setting. But, to tell you the truth, the 8 person meeting may have been even more productive. True, we didn’t get 40 new moratorium resolutions or $100, but we did get a moratorium resolution team formed to go out and actually canvas small businesses to pass moratorium resolutions. We did make concrete plans for our annual write-a-thons on March 1st (International Abolition Day). We did set up a lobby training date, so we can build the skills of the membership in Chattanooga so we can actually move legislators toward support of abolition. We set up some meetings with clergy members to oppose the execution of the mentally ill.

They’re little steps taken individually, but taken together, they form an action plan. It means that when I go and speak at a church in Chattanooga, we’ll have a number of actions that people can immediately plug into and get involved. It means that we have a plan of action. And I think that it’s all about those little actions. Because as we link them together we get a movement.

I love the bigger speaking engagements. they are terrific, and absolutely necessary to expand our base and get our message out. but without our smaller organizational meetings and action plans, they don’t get us anywhere. So really (with my apologies to Dickens) it was the best of times, it was the other best of times. Enjoy it all!

Fairly, there are numerous aspects you would like to think about medications. All discount medicaments save money, but few online drugstores offer better deals than other online drugstores. There isnвЂ™t anything you canвЂ™t order online anymore. Remedies like Deltasone ordinarily is used to treat diseases such as eye problems. Glucocorticoids naturally occurring steroids, which are easily absorbed from the gastrointestinal tract. There are varied drugs for every conditions. Cialis is a remedy prescribed to treat many illnesses. What do you already know about long term side effects of cialis? What consumers talk about how long does it take for cialis to take effect? A general sexual complaint among men is the erectile dysfunction. Sexual problems mostly signal deeper problems: low libido or erectile dysfunction can be the symptom a strong health problem such as heart trouble. Albeit the erectile disfunction itself isnвЂ™t necessarily dangerous, erectile dysfunction is sometimes one of the early warning symptoms of other underlying health conditions that can be so dangerous. Unfortunately nearly all over-the-counter medicines have sometimes dangerous aftereffects, from muscle aches to death. If you buy any erectile dysfunction medicaments like Cialis, check with a physician that they are sure to take with your other drugs. Do not take unwanted medications. Take Cialis to your local chemist’s shop which will dispose of them for you.