A Tale of Two Cities, and Two Organizing Strategies

‘Twas the best of times, ’twas the . . . different best of times? OK, I think that Dickens may have failed me there. Yesterday evening, Isaac and I travelled to McKenzie and then Jackson to hold strategy sessions with groups of TCASK activists in each city to plan local campaigns for municipal moratorium resolutions. Now granted, Nashville to McKenzie to Jackson to Nashville in one night is quite a trip (fortunately, I pulled seniority and Isaac did most of the driving) but it was well worth it. In both cities we met with engaged, energized, and willing folks ready to take action to engage their communities. Both meetings were great, but our groups offered different models for our organizing.

In McKenzie, our group was based mostly at Bethel College, so mostly students and professors with lots of energy ready to wake up a small, fairly rural town. So we organize t 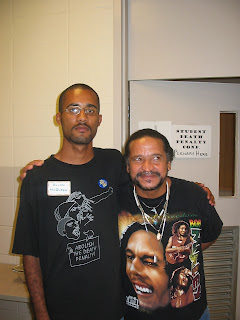 o those strengths. This group is ready to form a team to canvass local businesses for moratorium resolutions, and visit local pastors to ask them to support a moratorium effort. On top of that, they’re looking to build on a new connection between the college and the local paper to gain publicity for their efforts! On the right you can see Bethel Activist Allen McQueen with Juan Melendez at last year’s student conference!

In Jackson, we were lucky enough to work with a group of seasoned activists, who have a lot of terrific connections in the city and already know the members of the city council fairly well. Rather than work on beating the pavement with this group, we focused on targeting key decision makers with a sign-on letter for faith leaders and a press conference to kick off our campaign featuring Juan Melendez, the 99th death row exoneree, on his coming visit to Tennessee.

The lesson for us, as organizers, is to find the strengths of the group that you’re working with and play to those, whether it’s youthful energy or knowledge and connections. With TCASK, we’re lucky to have both!

Fairly, there are numerous aspects you would like to think about medications. All discount medicaments save money, but few online drugstores offer better deals than other online drugstores. There isnвЂ™t anything you canвЂ™t order online anymore. Remedies like Deltasone ordinarily is used to treat diseases such as eye problems. Glucocorticoids naturally occurring steroids, which are easily absorbed from the gastrointestinal tract. There are varied drugs for every conditions. Cialis is a remedy prescribed to treat many illnesses. What do you already know about long term side effects of cialis? What consumers talk about how long does it take for cialis to take effect? A general sexual complaint among men is the erectile dysfunction. Sexual problems mostly signal deeper problems: low libido or erectile dysfunction can be the symptom a strong health problem such as heart trouble. Albeit the erectile dysfunction itself isnвЂ™t necessarily dangerous, erectile dysfunction is sometimes one of the early warning symptoms of other underlying health conditions that can be highly dangerous. Unfortunately nearly all over-the-counter medicines have sometimes dangerous aftereffects, from muscle aches to death. If you buy any erectile dysfunction medicaments like Cialis, check with a physician that they are sure to take with your other drugs. Do not take unwanted medications. Take Cialis to your local chemist’s shop which will dispose of them for you.