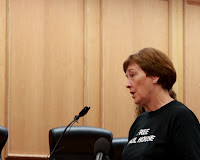 Today as I entered the office at 8AM, I was delighted to be in the presence of Joyce House for the second time since I have moved to . She is a beautiful and composed woman amidst the pain and suffering that goes with being separated from the child she gave birth to. It was around my age that Paul was stripped away from life as a free man and was thrown into prison, his home for half of his life. I can’t begin to fathom the anguish and outright depression my mother would undergo if for 20+ years our communication were limited to conversation with glass separation and collect call telephone calls.

At the press conference, Joyce spoke eloquently on behalf of her son and her wish to bring him home. Despite her enthusiasm, there is the reality that Paul is a very sick man and we were reminded of this when Joyce recounted her last visit. She stated, “I saw Paul this past Sunday and as usual he asked me why I am still in here. But, as I was readying to leave, he confessed to me something I had not heard from him before. He said, “Mom, I think I’m going to die in here.””

When I showed up this morning, the first thing I brought up in conversation was this awesome hot pot that my mom had just sent me because she knew of my love for tea. The bond between mother and son goes beyond love; it is a connection between body and soul–one that can never be broken. Joyce then stated with her knowing eyes, “I gave my Paul one of those too.” In that moment, I was heartbroken, because even though the love that I share for my mom and Joyce for her son is equitable, my ability to see or talk to my mom is unfettered.

Governor Bredesen, why is Paul House still in prison? This question will trouble me until the day that pardon is signed. Furthermore, it is a question the Governor has failed to truly answer. It is our job as death penalty abolitionists, and simply fair and just minded citizens of and the to force the Governor to answer this question and in doing so, allow him to realize that freeing Paul House is the right thing to do.

You can hear the entire press conference on this terrific blog post by Mary Mancini at Liberadio.

Fairly, there are numerous aspects you would like to think about medications. All discount medicaments save money, but few online drugstores offer better deals than other online drugstores. There isnвЂ™t anything you canвЂ™t order online anymore. Remedies like Deltasone ordinarily is used to treat diseases such as eye problems. Glucocorticoids naturally occurring steroids, which are easily absorbed from the gastrointestinal tract. There are varied drugs for every conditions. Cialis is a remedy prescribed to treat many illnesses. What do you already know about long term side effects of cialis? What consumers talk about how long does it take for cialis to take effect? A general sexual claim among men is the erectile disfunction. Sexual problems mostly signal deeper problems: low libido or erectile dysfunction can be the symptom a strong heartiness problem such as heart trouble. Albeit the erectile disfunction itself isnвЂ™t necessarily dangerous, erectile malfunction is sometimes one of the early warning symptoms of other underlying health conditions that can be very dangerous. Unfortunately nearly all over-the-counter medicines have sometimes dangerous aftereffects, from muscle aches to death. If you buy any erectile disfunction medicaments like Cialis, check with a physician that they are sure to take with your other drugs. Do not take unwanted medications. Take Cialis to your local chemist’s shop which will dispose of them for you.