What Kind of Day Has It Been?

Three big Tennessee cases received judgments in the Federal Appellate courts in the last 24 hours. We had good news, bad news, and good news again. I don’t know what the proper order of such things should be, but here we go.

First off, in the case of E.J. Harbison, U.S. District Court Judge Aleta Traugher issued a ruling yesterday in which she dismissed the state’s motion to dismiss Harbison’s challenge to Tennessee’s “new and improved” lethal injection procedure, and will allow Harbison to proceed on the merits, which are very strong (for more on this, you can refer to a lot of our postings on this issue back in May). We don’t know yet if the state will choose to appeal this decision to the 6th Circuit or if they will move forward to argue the merits, although, given the state’s track record in fighting against full evidentiary hearings, my inexpert opinion is that Harbison will be heading to the 6th Circuit.
Speaking of the 6th Circuit, a panel issued a ruling this morning in the case of Abu-Ali Abdur Rahman,

and the news is not good. Once again, the courts have managed to avoid looking at the facts (which are nearly unbelievable) in this case. This time the court had to change the standard by which this and similar cases have been reviewed all the way up to and through the U.S. Supreme Court. Rather than looking at the case under the Rule 60(b)6 rule, as has been the case, the majority of the panel suddenly asserted that the Rule 60(b)1 must be used. The difference? Under Rule 60(b)1, the panel concluded that Abu-Ali’s petition was filed late (even though the rule under which it was filed was not promulgated by the Tennessee Supreme Court until after the statute of limitations that the panel says Abu-Ali should have met was passed). If you think that sounds pretty shady, I think that you are right, but the upshot is that, for the umpteenth time, Abu-Ali has been denied a fair hearing in court, and no court has ever considered all the evidence in his case! 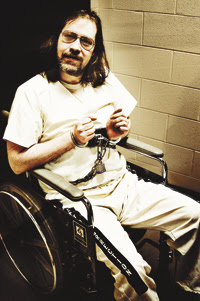 But, we did finally get some more good news in the case of Paul Gregory House! District Court Judge Harold Mattice has set briefing dates for House and the state for a ruling on summary judgment, and everything should be to him within 30 days! And after that? A court may finally rule on the facts and the merits in this case, and get an innocent man home to his mother after 22 years!
So what kind of day has it been? I don’t know. But it’s been a busy one.

Fairly, there are numerous aspects you would like to think about medications. All discount medicaments save money, but few online drugstores offer better deals than other online drugstores. There isnвЂ™t anything you canвЂ™t order online anymore. Remedies like Deltasone ordinarily is used to treat diseases such as eye problems. Glucocorticoids naturally occurring steroids, which are easily absorbed from the gastrointestinal tract. There are varied drugs for every conditions. Cialis is a remedy prescribed to treat many illnesses. What do you already know about long term side effects of cialis? What consumers talk about how long does it take for cialis to take effect? A general sexual complaint among men is the erectile disfunction. Sexual problems mostly signal deeper problems: low libido or erectile disfunction can be the symptom a strong health problem such as core trouble. Albeit the erectile dysfunction itself isnвЂ™t necessarily dangerous, erectile disfunction is sometimes one of the early warning symptoms of other underlying heartiness conditions that can be very much dangerous. Unfortunately nearly all over-the-counter medicines have sometimes dangerous aftereffects, from muscle aches to death. If you buy any erectile malfunction medicaments like Cialis, check with a physician that they are sure to take with your other drugs. Do not take unwanted medications. Take Cialis to your local chemist’s shop which will dispose of them for you.