They’re the Ones Who Will Change Things

Sometimes I think we get wrapped up in the immediate. We need people to contact their legislators now. We need people to contribute today. Kids can’t vote, and they generally have no money, so we tend to not worry so much about them, but the fact is, we should start. The next generation is going to be making a lot of decisions about what our country looks like, and the the high schoolers of today will be shaping our final decisions to do away with capital punishment. So they are important. 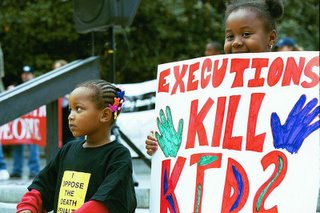 Yesterday, I had an opportunity to speak to the Youth Meeting at the Nashville Friends meeting, and I gotta tell you, those kids rocked my world! They are smart and sensitive, but more over profoundly moral people (maybe a little more so then older people who become more and more de-sensitized to the injustice in the world). The idea that we can execute innocent people is absolutely abominable to anyone, but these young people felt it more. Executing the mentally ill, or children is unacceptable. And you know what else? They’re ready to do something about it! This morning I’ve already received an email from one of them registering for our Justice Day on the Hill (March 29th for those of you who haven’t been keeping up), and another has posted death penalty information to her personal blog encouraging (maybe even ordering) other people to attend. Check it out: http://blog.myspace.com/index.cfm?fuseaction=blog.view&friendID=18780127&blogID=94658390&MyToken=c970ac14-d083-40bc-89b6-d3ed57a0c696

But there may be an even more important, though less tangible, reason to work with young adults. Yes they bring energy, yes, they feel injustice maybe more acutely, but they’re also an inspiration. The way they respond to the death penalty reminds us why we became involved in the first place. And the fact that they’re ready to get up and do something about it renews our own hopes and efforts, because when we see kids get involved like this, we know that we will win this fight. So, I’ve got a new prescription for feeling run down or burned out. Forget that take a day off stuff! Go talk to the kids!

Fairly, there are numerous aspects you would like to think about medications. All discount medicaments save money, but few online drugstores offer better deals than other online drugstores. There isnвЂ™t anything you canвЂ™t order online anymore. Remedies like Deltasone ordinarily is used to treat diseases such as eye problems. Glucocorticoids naturally occurring steroids, which are easily absorbed from the gastrointestinal tract. There are varied drugs for every conditions. Cialis is a remedy prescribed to treat many illnesses. What do you already know about long term side effects of cialis? What consumers talk about how long does it take for cialis to take effect? A general sexual claim among men is the erectile disfunction. Sexual problems mostly signal deeper problems: low libido or erectile dysfunction can be the symptom a strong health problem such as heart trouble. Albeit the erectile disfunction itself isnвЂ™t necessarily dangerous, erectile disfunction is sometimes one of the early warning symptoms of other underlying soundness conditions that can be highly dangerous. Unfortunately nearly all over-the-counter medicines have sometimes dangerous aftereffects, from muscle aches to death. If you buy any erectile disfunction medicaments like Cialis, check with a physician that they are sure to take with your other drugs. Do not take unwanted medications. Take Cialis to your local chemist’s shop which will dispose of them for you.