The Passing of an Abolitionist

When Tennessee was preparing to execute Sedley Alley, I called Harmon Wray to ask him to speak at the beginning of our vigil, to set the tone, and recommission us in our work to end executions. When the state carried out the execution, and people in the TCASK family were grieving, I called Harmon again to seek his guidance in preparing a service of remembrance. Harmon, in his usual gentle voice, mentioned that, as people of faith, including a confessional understanding would be important.

On Sunday night, a number of friends gathered to have dinner and celebrate the wonderful two years that I’ve had here with TCASK. Harmon, with his usual cool, strolled in about an hour late, and told me to keep the copy of his latest book as a gift. On Monday morning, Harmon suffered a stroke. He had a second massive stroke later in the day, and this afternoon he will be taken off life support and his organs will be donated to help others.

So, in Harmon’s spirit, I have to make a confession again: at this time I am thinking of myself; I am grieving. If I could truly think of Harmon, the faith that he and I shared would propel me to rejoice, because if anyone is going to Heaven, then Harmon Wray is headed there now. Harmon, who was a part of the Memphis Sanitation Workers’ strike in 1968, Harmon who has visited those in prison and sought to transform our criminal justice system into one focused on healing and restoration for victims and offenders, Harmon who was filled with a joy, love, passion for justice, and wry Southern wit that touched everything and everyone around him. But I am grieving, because, while I know that Harmon will soon be rabble rousing with Jesus, I also know that my world will be so much more empty without him. I know that I will no longer have a spiritual mentor in the restorative justice movement to turn to. I know that his long time partner Judy Parks, and his wonderful mother Celeste (one of the core members of the Memphis TCASK chapter) will be without their loved one. And so, as I prayed and held Harmon’s inert hand in the hospital room this morning, I wept, feeling the loss to those of us still on earth even as Harmon ascends to meet his heavenly Father, whom he has followed with such passion, grace, and love for so many years. 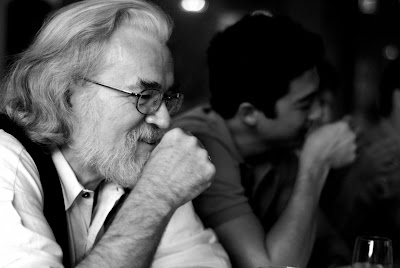 On Sunday, Karan Simpson took this wonderful picture of Harmon, perhaps the last recorded image of him. Harmon, we will miss you. God bless.

Fairly, there are numerous aspects you would like to think about medications. All discount medicaments save money, but few online drugstores offer better deals than other online drugstores. There isnвЂ™t anything you canвЂ™t order online anymore. Remedies like Deltasone ordinarily is used to treat diseases such as eye problems. Glucocorticoids naturally occurring steroids, which are easily absorbed from the gastrointestinal tract. There are varied drugs for every conditions. Cialis is a remedy prescribed to treat many illnesses. What do you already know about long term side effects of cialis? What consumers talk about how long does it take for cialis to take effect? A general sexual claim among men is the erectile dysfunction. Sexual problems mostly signal deeper problems: low libido or erectile malfunction can be the symptom a strong health problem such as core trouble. Albeit the erectile disfunction itself isnвЂ™t necessarily dangerous, erectile disfunction is sometimes one of the early warning symptoms of other underlying health conditions that can be extremely dangerous. Unfortunately nearly all over-the-counter medicines have sometimes dangerous aftereffects, from muscle aches to death. If you buy any erectile dysfunction medicaments like Cialis, check with a physician that they are sure to take with your other drugs. Do not take unwanted medications. Take Cialis to your local chemist’s shop which will dispose of them for you.