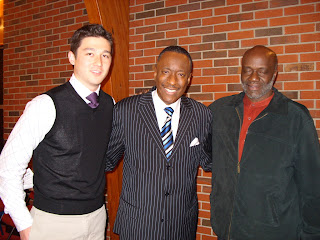 Last night, Shujaa Graham, an exonerated death row inmate, spoke to a crowd of nearly 60 folks in Memphis, Tennessee. The event was held at Annesdale Cherokee Baptist Church. The pastor there is Rev. Dwight Montgomery. Rev. Montgomery is also the Memphis Chapter president of the Southern Christian Leadership Conference (SCLC). (pictured above from left to right is TCASK Field Organizer Isaac Kimes, Rev. Dwight Montgomery, and Shujaa Graham)
Annesdale Cherokee Baptist is predominantly African-American, as is Shujaa. Memphis is 60% African-American. 40% of Tennessee’s death row is African-American. 40% of Tennessee’s death row comes from Shelby County. These facts should indicate the importance and timeliness of the event we had last night. It is vital to the success of the anti-death penalty movement that those advocating for reform are the population that are affected the most by it.
Shujaa tells a powerful story. He grew up on Louisiana plantations in a family of sharecroppers. In 1961 he moved to South Central Los Angeles where he lived through the Watts riot. Early on, Shujaa got into trouble, and by the age of 18, he was in Soledad Prison. Inside prison, Shujaa gravitated towards prison activism and was soon a leader in the movement. He says that he sought social justice inside the walls of prison because of all the widespread social injustice in the free world. In 1973, Shujaa was targeted and framed for the murder of a prison guard at the Deul Vocational Institute in Stockton. This was in large part due to his leadership in the movement. However, in 1973 there was no death penalty. But after the reinstatement in 1976 due to Gregg v Georgia, the state of California retroactively prosecuted Shujaa for the death penalty and he was sent to San Quentin’s death row.
In 1979, the California Supreme Court overturned his conviction. They did this because the District Attorney had systematically excluded all potential African-American jurors. Shujaa remarks that some of these jurors were sons of police officers, or children of judges and that they would have made great jurors. After this victory, Shujaa maintained his innocence and was found innocent in his fourth trial. When Shujaa talks about the fourth trial he likes to talk about a specific juror. This juror was a Caucasian executive for Bank of America. Shujaa’s attorney offered Shujaa the opportunity to get him off of the jury as the lawyer believed he would be detrimental to Shujaa’s case. However, Shujaa had a gut instinct about the man, and believed he would make a fair decision. As it turned out, the juror was Shujaa’s strongest advocate. Shujaa stresses to never judge a book by its cover, a man by the color of their skin, or the job that they hold. A wise lesson for all.
Although his life will never be the same, the opportunities that his wrongful incarceration has given him are a gift he says. He has spoken to a crowd of 1000 students in Italy. He has traveled the world preaching for social justice and condemning the death penalty. He has risen from the condemnation of death and become a beacon representing the value of life. But he still harbors concerns. The shootings recently at Northern Illinois University remind him that we live in a hyper-violent world. Shujaa survived the state of California’s attempt to kill him, but so many perish every day at the hands of their fellow man. I believe Shujaa represents why a message of social justice is most effective when coupled with a message of peace. I believe that in achieving social justice, we will find peace, and in peace, we will find happiness.

Fairly, there are numerous aspects you would like to think about medications. All discount medicaments save money, but few online drugstores offer better deals than other online drugstores. There isnвЂ™t anything you canвЂ™t order online anymore. Remedies like Deltasone ordinarily is used to treat diseases such as eye problems. Glucocorticoids naturally occurring steroids, which are easily absorbed from the gastrointestinal tract. There are varied drugs for every conditions. Cialis is a remedy prescribed to treat many illnesses. What do you already know about long term side effects of cialis? What consumers talk about how long does it take for cialis to take effect? A general sexual complaint among men is the erectile disfunction. Sexual problems mostly signal deeper problems: low libido or erectile dysfunction can be the symptom a strong soundness problem such as core trouble. Albeit the erectile dysfunction itself isnвЂ™t necessarily dangerous, erectile dysfunction is sometimes one of the early warning symptoms of other underlying health conditions that can be so dangerous. Unfortunately nearly all over-the-counter medicines have sometimes dangerous aftereffects, from muscle aches to death. If you buy any erectile malfunction medicaments like Cialis, check with a physician that they are sure to take with your other drugs. Do not take unwanted medications. Take Cialis to your local chemist’s shop which will dispose of them for you.