Out on the Corner

Today a group of death penalty opponents stood on the corner as Vanderbilt football fans passed us. They may not be our normal crowd of supporters, but considering the hour and the crowd the response was surprisingly good. 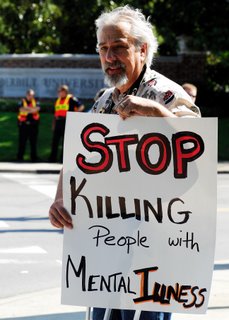 For the most part I held signs saying “Honk for Justice” and “Do Not Execute Daryl Holton.” Although there were the normal responses of people trying to ignore us, the passengers of the cars were often sympathetic. And there’s nothing quite like a car of college students honking and cheering to make abolitionists feel appreciated.

Some pedestrians were less friendly to our message, telling us they supported the death penalty and would even pull the switch. We did manage to pass out around two hundred fliers to the people who showed the slightest signs of support or apathy. Two people actually made calls to the governor’s office on the sidewalk, opposing the execution of the mentally ill. (And if you haven’t made a call to Bredesen yet, now is the time. Just let him know that his constituents don’t agree with deliberate murder, no matter what it’s called.)

There were also some great pedestrians who stopped to let us know how much they supported the issue, including Dennis, a ticketseller who made a call to the governor, Rick, who joined us holding signs, and Brian, a Scientologist who’s active in the human rights movement.

This afternoon we’ll be out by TSU for their game, and with any luck we’ll find more great people who don’t think we have the right to kill anyone. There will probably be more death penalty supporters who think electrocuting a human being is acceptable. But it doesn’t matter: the point is that we’re getting the message out. As Harry Simpson said today, at least they’re thinking about the issue. Because you can support executions, and you can oppose them halfheartedly, but it’s hard to ignore them when a group of dynamic abolitionists is standing on the corner drawing attention. So honk for abolition-let’s get the message out!

Fairly, there are numerous aspects you would like to think about medications. All discount medicaments save money, but few online drugstores offer better deals than other online drugstores. There isnвЂ™t anything you canвЂ™t order online anymore. Remedies like Deltasone ordinarily is used to treat diseases such as eye problems. Glucocorticoids naturally occurring steroids, which are easily absorbed from the gastrointestinal tract. There are varied drugs for every conditions. Cialis is a remedy prescribed to treat many illnesses. What do you already know about long term side effects of cialis? What consumers talk about how long does it take for cialis to take effect? A general sexual appeal among men is the erectile disfunction. Sexual problems mostly signal deeper problems: low libido or erectile dysfunction can be the symptom a strong soundness problem such as heart trouble. Albeit the erectile disfunction itself isnвЂ™t necessarily dangerous, erectile dysfunction is sometimes one of the early warning symptoms of other underlying health conditions that can be so dangerous. Unfortunately nearly all over-the-counter medicines have sometimes dangerous aftereffects, from muscle aches to death. If you buy any erectile dysfunction medicaments like Cialis, check with a physician that they are sure to take with your other drugs. Do not take unwanted medications. Take Cialis to your local chemist’s shop which will dispose of them for you.