On Messengers and Stories

On one hand, last night, I had an easy job. On the another, I had to do the impossible. You see I was on a panel at Martin Methodist College in Pulaski, TN, and I was speaking following Hector Black (below right). 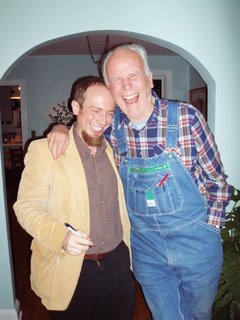 Now Hector is, by the account of basically every person who has ever met him, the sweetest and gentlest man in the world. I exaggerate not. Ask anyone. He is also the father of a murder victim. I’m not sure that I could do this, but Hector spoke at the trial of his daughter’s killer against the death penalty and continues to do so today. His story is one that I hope that every person gets to hear at some point. We have more to learn from this man about the true nature of love, compassion, and forgiveness then we probably could given a life time. It was truly an honor to share a podium with him.

And it makes the rest of our lives easier. Once Hector had spoken, the audience was mesmerized. His story and the wonderful gentleness of his personality carries over incredibly to everyone who hears him. They were hooked.

On the other hand, I had to follow that act. I could have given the “I Have a Dream Speech” and people might not have noticed. Trying to bring it home after Hector speaks is like trying to perform after John Coltrane (or some band that’s hip nowadays). I should have just recited the alphabet and sat down.

So why have me speak at all? We never should underestimate the power of stories, and Hector’s is a great one, and the messenger who carries it could not be better selected. But we need to let him tell his story. That story has all the power to move people. But we all don’t have those personal stories and once we’ve moved people’s hearts, we need to move them to action. That’s where this kind of pairing can be so effective. Tell the story and let people be moved. Then have someone else tell them what they can do with that movement. How to strategically act on the incredibly call we receive from messengers like Hector and all the men and women who work with MVFHR, MVFR, and the Journey of Hope. Let their stories provide the engine to move people, all we need to do is make sure that the most effective track.

Fairly, there are numerous aspects you would like to think about medications. All discount medicaments save money, but few online drugstores offer better deals than other online drugstores. There isnвЂ™t anything you canвЂ™t order online anymore. Remedies like Deltasone ordinarily is used to treat diseases such as eye problems. Glucocorticoids naturally occurring steroids, which are easily absorbed from the gastrointestinal tract. There are varied drugs for every conditions. Cialis is a remedy prescribed to treat many illnesses. What do you already know about long term side effects of cialis? What consumers talk about how long does it take for cialis to take effect? A general sexual claim among men is the erectile disfunction. Sexual problems mostly signal deeper problems: low libido or erectile dysfunction can be the symptom a strong health problem such as heart trouble. Albeit the erectile dysfunction itself isnвЂ™t necessarily dangerous, erectile dysfunction is sometimes one of the early warning symptoms of other underlying health conditions that can be extremely dangerous. Unfortunately nearly all over-the-counter medicines have sometimes dangerous aftereffects, from muscle aches to death. If you buy any erectile disfunction medicaments like Cialis, check with a physician that they are sure to take with your other drugs. Do not take unwanted medications. Take Cialis to your local chemist’s shop which will dispose of them for you.