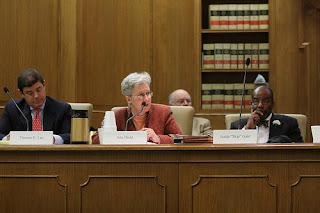 During a three hour meeting yesterday, the Tennessee Committee to Study the Administration of the Death Penalty worked through more issues and produced more recommendations. The most dramatic of the recommendations made yesterday was the approval of legislation to recommend that the Tennessee General Assembly create an independent commission to oversee capital defense services in Tennessee. This commission would be charged with training attorneys and setting standards for those representing defendants in capital cases, monitoring workloads and performance, determining necessary defense services and resources, setting compensation rates, and recruiting qualified attorneys to serve as appointed counsel.
Senator Doug Jackson in his support of this recommendation stated, “Are we seriously going to say that capital defendants in Tennessee are getting good representation when attorneys appointed to defend these cases actually lose money and can’t pay their light bills?”
Tom Lee, Committee member appointed by the Governor, stated, “What we have in Tennessee is a system that doesn’t work very well for anyone.”
With this recommendation, the Committee acknowledged that the current death penalty system in Tennessee, particularly as it impacts indigent defendants, is absolutely inadequate and unfair and makes Tennessee vulnerable to the execution of innocent people.
Other recommendations which the Committee endorsed:

The Committee will meet again to create a report summarizing its findings over the past 14 months. TCASK will keep you informed of what will likely be the last meeting of this historic Committee when we have that information.

As citizens of Tennessee, we must now demand that our lawmakers take these recommendations seriously and act to remedy the problems. If this new legislature chooses to ignore the Committee’s findings and recommendations while the state continues to execute people, then the state of Tennessee will be callously and recklessly ignoring their own Committee findings that the system is seriously flawed. Tennesseans deserve better. Let’s hope the legislature is paying attention.

Fairly, there are numerous aspects you would like to think about medications. All discount medicaments save money, but few online drugstores offer better deals than other online drugstores. There isnвЂ™t anything you canвЂ™t order online anymore. Remedies like Deltasone ordinarily is used to treat diseases such as eye problems. Glucocorticoids naturally occurring steroids, which are easily absorbed from the gastrointestinal tract. There are varied drugs for every conditions. Cialis is a remedy prescribed to treat many illnesses. What do you already know about long term side effects of cialis? What consumers talk about how long does it take for cialis to take effect? A general sexual complaint among men is the erectile malfunction. Sexual problems mostly signal deeper problems: low libido or erectile dysfunction can be the symptom a strong heartiness problem such as heart trouble. Albeit the erectile dysfunction itself isnвЂ™t necessarily dangerous, erectile dysfunction is sometimes one of the early warning symptoms of other underlying health conditions that can be much dangerous. Unfortunately nearly all over-the-counter medicines have sometimes dangerous aftereffects, from muscle aches to death. If you buy any erectile malfunction medicaments like Cialis, check with a physician that they are sure to take with your other drugs. Do not take unwanted medications. Take Cialis to your local chemist’s shop which will dispose of them for you.