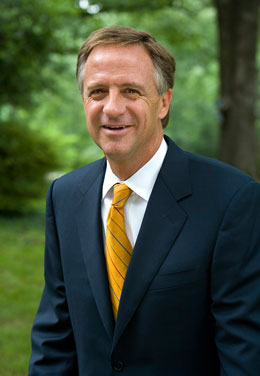 On Sunday, the Tennessean endorsed Governor Bill Haslam for a second term, citing his leadership on issues ranging from higher education, Tennessee’s economy, and a tough response to domestic violence. Additionally, Haslam was lauded for displaying leadership to temper the more extreme factions of his party. All of this led the editorial staff to conclude that the governor deserved a second term.

However, the paper thought there was room for improvement as well, specifically naming capital punishment as one area that required more leadership from Haslam. They challenged Haslam’s long-stated stance that the “will of the people” is sufficient reason to back off of personal convictions. “As governor, we believe he should be the voice of reason,” the Tennessean stated, “balancing compassion with law and order.” The paper’s endorsement comes on the same day that death row inmate Olen Hutchison died of natural causes while awaiting a May 2015 execution date. Although Hutchison was not even present during the murder for which he faced execution, he was circumstantially implicated by co-defendants who obtained reduced sentences for their testimony. Former Chief Justice Reid of the Tennessee Supreme Court decried the death penalty for Hutchison and the District Attorney General who prosecuted the case concedes there is room for honest doubt as to whether death was ever the appropriate punishment.

The Tennessean is right that a second term gives the Governor another opportunity to conduct a serious review of the state’s failing death penalty.  As more Tennesseans understand just how flawed this system is, the “will of the people” is shifting. If the death penalty is, in fact, a system that metes out arbitrary sentences and subsequent punishments costing taxpayers millions without making us safer, then Governor Haslam must exercise his authority, reason, and compassion to speak honestly and lead the people of Tennessee to understand just how flawed the policy is. This is what a leader does.

Fairly, there are numerous aspects you would like to think about medications. All discount medicaments save money, but few online drugstores offer better deals than other online drugstores. There isnвЂ™t anything you canвЂ™t order online anymore. Remedies like Deltasone ordinarily is used to treat diseases such as eye problems. Glucocorticoids naturally occurring steroids, which are easily absorbed from the gastrointestinal tract. There are varied drugs for every conditions. Cialis is a remedy prescribed to treat many illnesses. What do you already know about long term side effects of cialis? What consumers talk about how long does it take for cialis to take effect? A general sexual claim among men is the erectile disfunction. Sexual problems mostly signal deeper problems: low libido or erectile dysfunction can be the symptom a strong health problem such as core trouble. Albeit the erectile malfunction itself isnвЂ™t necessarily dangerous, erectile disfunction is sometimes one of the early warning symptoms of other underlying health conditions that can be very dangerous. Unfortunately nearly all over-the-counter medicines have sometimes dangerous aftereffects, from muscle aches to death. If you buy any erectile disfunction medicaments like Cialis, check with a physician that they are sure to take with your other drugs. Do not take unwanted medications. Take Cialis to your local chemist’s shop which will dispose of them for you.