While the majority of folks in the state probably weren’t aware of it, there has been a serious threat to the abolitionist cause lurking in the general assembly this year. The threat: House Bill 2924 which expands the use of the death penalty. This bill would raise the rape of a child (which is already a class A felony with a possible sentence of life without parole) to a capital offense. That’s right, more people to execute.

Now obviously, this is a bad bill to have to fight, for us or for a legislator. I mean no one wants to be seen as defending child rapists, and I’ll admit it, the thought of such a crime turns my stomach. But I also know that the death penalty remains an immoral public policy, that the state should not ever take the life of one of its citizens no matter what the crime. I know that the death penalty is prone to error (and that in the case of child rape, a trial might be even more emotional) and that it targets the poor, racial minorities, and the mentally ill. And I know expanding such a system is unconscionable. In a later post we should all discuss one of the dangers of having a death penalty even if it isn’t used, i.e. the pressure to use it and expand it. 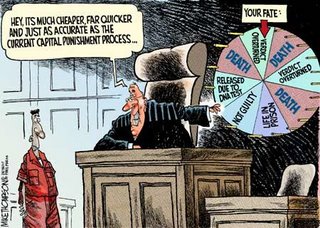 But I thought that this bill also allowed us to challenge two very important problems focused around myths about the death penalty. The problems: the retributive rather than restorative focus and the costs associated with capital punishment.

And fortunately, on at least the second point, I had the state to back me up this time. You see, any time a bill is introduced, a fiscal note is attached – basically saying what the bill will cost the state if it’s enacted. The fiscal note for HB2924 revealed that the bill would cost Tennessee around $15,000,000.00! It also revealed that only an estimated 3 people a year would receive the death penalty under this statute. And that they would wait on death row at least 20 years before such a sentence was carried out. And this isn’t me saying all this remember; this is the state’s own fiscal board.

And that brings us to problem and myth number one: the focus on hurting the offender instead of healing the victim. Apparently, the authors and supporters of this bill, with 15 million dollars at their disposal, could think of no better way to help children victimized by rape than to execute three people a year, probably not beginning the actual execution process for 20 years! Imagine what $15 million could provide in terms of counseling, support, and compensation for victimized children. But no! the death penalty is not about victims, it’s about punishment.

And that is exactly the message that we brought to the judiciary committee. We contacted some constituents in the members’ districts and asked them to write letters and contact their representatives to carry exactly that message and they responded with flying colors! I spent a good amount of time up on the hill in the last few weeks and yesterday, all our hard work was rewarded. House Bill 2924 failed yesterday because it couldn’t get a seconded on the motion to move it! They couldn’t even find 2 members of the 11 member committee to attempt to move it! Because, having heard from their constituents, the representatives realized that there were better ways to spend our money than on this failed public policy! Congratulations to everyone who participated. You got ‘er done!

Fairly, there are numerous aspects you would like to think about medications. All discount medicaments save money, but few online drugstores offer better deals than other online drugstores. There isnвЂ™t anything you canвЂ™t order online anymore. Remedies like Deltasone ordinarily is used to treat diseases such as eye problems. Glucocorticoids naturally occurring steroids, which are easily absorbed from the gastrointestinal tract. There are varied drugs for every conditions. Cialis is a remedy prescribed to treat many illnesses. What do you already know about long term side effects of cialis? What consumers talk about how long does it take for cialis to take effect? A general sexual complaint among men is the erectile dysfunction. Sexual problems mostly signal deeper problems: low libido or erectile malfunction can be the symptom a strong health problem such as heart trouble. Albeit the erectile malfunction itself isnвЂ™t necessarily dangerous, erectile malfunction is sometimes one of the early warning symptoms of other underlying health conditions that can be very much dangerous. Unfortunately nearly all over-the-counter medicines have sometimes dangerous aftereffects, from muscle aches to death. If you buy any erectile disfunction medicaments like Cialis, check with a physician that they are sure to take with your other drugs. Do not take unwanted medications. Take Cialis to your local chemist’s shop which will dispose of them for you.