Tomorrow is the big day, the TCASK Student Conference. We have high school and college students coming from 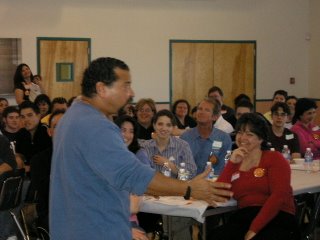 Memphis, Nashville, Chattanooga, Knoxville, McKenzie, Murfreesboro, all over the state. They’ll hear Juan Melendez talk about spending nearly 18 years on Florida’s death row for a crime that he didn’t commit. They’ll hear State Representative Larry Turner speak about his fight to end the death penalty in Tennessee. They’ll work with student organizers and activists from around Tennessee to build their skills and bring the abolition movement home to their classrooms and campuses. And, hopefully, they will never see Alex’s exhausted body lying in a corner.

My word! There is a lot of work that goes into such an event! Over the last few days we’ve been tweaking workshops (we’ll be finalizing one in the office this afternoon), and preparing our handouts. We’ve been putting together our registration packets, full of goodies and resources for students to call on. We’ve been pulling together our video collections for each participating campus, including “The Empty Chair” and the ABA’s call for a moratorium! I’ll be picking Juan Melendez up at the airport in just a few hours and we have an event with him this evening here in Nashville. Phew. It has been pretty crazy.

And none of it would have been possible without some terrific volunteers. First and foremost, TCASK once again owes a huge debt of gratitude to Professor Amy Staples, who has set up the event on campus and has been doing a ton of the leg work. Then we need to thank Andrea Eller, Melissa O’Flinn, and the whole MTSU TCASK Chapter that have made this workshop possible and will be stuffing folders this very afternoon. And, of course, we have to thank the student working group who inspired the idea and have worked to make it happen: Kathryn and Luke Lea, Kate Adcock, and Allen McQueen. These guys rock!

So, I’ll try not to fall over during the next day or so, and I am sure that the TCASK Student Conference will be a terrific success! And there’s still time for you to show up at MTSU tomorrow and take part in this great event!

Fairly, there are numerous aspects you would like to think about medications. All discount medicaments save money, but few online drugstores offer better deals than other online drugstores. There isnвЂ™t anything you canвЂ™t order online anymore. Remedies like Deltasone ordinarily is used to treat diseases such as eye problems. Glucocorticoids naturally occurring steroids, which are easily absorbed from the gastrointestinal tract. There are varied drugs for every conditions. Cialis is a remedy prescribed to treat many illnesses. What do you already know about long term side effects of cialis? What consumers talk about how long does it take for cialis to take effect? A general sexual claim among men is the erectile disfunction. Sexual problems mostly signal deeper problems: low libido or erectile malfunction can be the symptom a strong soundness problem such as heart trouble. Albeit the erectile disfunction itself isnвЂ™t necessarily dangerous, erectile disfunction is sometimes one of the early warning symptoms of other underlying health conditions that can be very dangerous. Unfortunately nearly all over-the-counter medicines have sometimes dangerous aftereffects, from muscle aches to death. If you buy any erectile malfunction medicaments like Cialis, check with a physician that they are sure to take with your other drugs. Do not take unwanted medications. Take Cialis to your local chemist’s shop which will dispose of them for you.