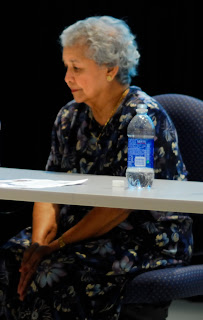 What if your child or loved one was murdered? Would you then desire revenge, desire retribution, desire the death penalty?

I always find it tough to answer this question because I have not been through the experience of having a family member murdered. I try to imagine the pain and anger that would fill me up if my mother or my sister were to be killed and I have to stop because I know that anger would consume me. So when I tell you from the bottom of my heart that if my mother was murdered that I would fight to the bone to ensure the murderer did not receive the death penalty, would you believe me?

Celia “Cici” McWee knows this pain and she shared it with us on Monday at our panel. On New Years day in 1980 her daughter, Joyce McWee, was murdered in a crime of passion by her husband. The husband was let off with one year of probation and retained custody of the children due to his family’s appointment of an excellent attorney and their general wealth. Twenty years later, her son Jerry McWee, was executed on death row for a murder of a convenience store clerk. After the first robbery, Jerry witnessed his partner in the crime randomly killing another individual and Jerry foresaw things getting out of hand so he turned himself in. However, the partner, a younger man with a long criminal history, struck a deal with the state and was able to avoid the death penalty if he testified against Jerry.

Celia McWee knows what it is like to have a loved one murdered…twice. She knows that money buys power in our justice system as she saw this two times over. Jerry couldn’t hire excellent attorneys to save him from execution and Joyce’s husband could. Celia knows that killing, in any shape or form, by the state or by a husband, causes pain–pain that she will experience every day for the rest of her life.

We are frequently challenged to address the rights of victims, to acknowledge their pain and their right to retribution. Celia has had a daughter murdered and a son executed, she’s a victim twice over. It will be easy for me to address that issue because of beautiful people like Celia who know firsthand how broken our system truly is and share this with the world.

Come back tomorrow for a story on Juan Melendez, a man that served on Florida’s death row for 17 years 8 months and 1 day for a crime he did not commit. Juan was also here in this past weekend and did an incredible job kicking off our moratorium resolution campaign which I will also talk about in tomorrow’s blog.

Fairly, there are numerous aspects you would like to think about medications. All discount medicaments save money, but few online drugstores offer better deals than other online drugstores. There isnвЂ™t anything you canвЂ™t order online anymore. Remedies like Deltasone ordinarily is used to treat diseases such as eye problems. Glucocorticoids naturally occurring steroids, which are easily absorbed from the gastrointestinal tract. There are varied drugs for every conditions. Cialis is a remedy prescribed to treat many illnesses. What do you already know about long term side effects of cialis? What consumers talk about how long does it take for cialis to take effect? A general sexual appeal among men is the erectile dysfunction. Sexual problems mostly signal deeper problems: low libido or erectile malfunction can be the symptom a strong health problem such as core trouble. Albeit the erectile disfunction itself isnвЂ™t necessarily dangerous, erectile disfunction is sometimes one of the early warning symptoms of other underlying soundness conditions that can be much dangerous. Unfortunately nearly all over-the-counter medicines have sometimes dangerous aftereffects, from muscle aches to death. If you buy any erectile disfunction medicaments like Cialis, check with a physician that they are sure to take with your other drugs. Do not take unwanted medications. Take Cialis to your local chemist’s shop which will dispose of them for you.