I hope that it is clear to everyone that TCASK is not a religious organization, and that we have a lot of members who are not “religious” and certainly not Christian. Still, I’m here as a Jesuit Volunteer, and I know that a large part of the abolition movement is motivated by a religious (and often Christian) faith tradition, and Easter provides a great time to reflect on why that is. 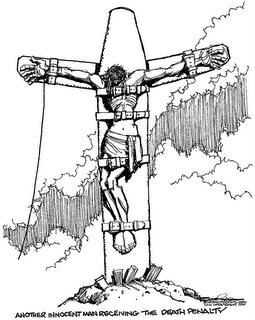 Many people forget that during the Easter season, and on Good Friday in particular, we are remembering an execution. Christ was executed for challenging the ruling class in his society. Christ was poor, with little connection to the wealthy and powerful. He was from an oppressed ethnicity (in the Roman empire), so in a lot of ways, very few things have changed in the pattern of executions over the last 2,000 years.

But I think that the Easter season lets us look beyond all of this to what is, for many people, the core belief and understanding that leads to abolition. Christ’s execution reminds us of the fact that all people, even criminals, are people. Christian traditions across the country fall into the “pro-life” camp. This pro-life belief stems from an understanding that all human life is endowed with an inviolable dignity, a touch of Godliness. It is understanding that all human life is sacred to God, so sacred that Christ was sent to die so the rest of us, all sinners, could live, that leads so many Christians and Christian denominations to oppose the use of the death penalty.

I spent some of my Easter weekend re-reading Sister Helen Prejean’s book Death of Innocents, a terrific read that everyone should peruse if they haven’t already. In it, Prejean speaks of two men that she accompanied to their deaths who were, in her belief and to basic common sense judgment, innocent. But she also dwells on the Catholic church’s slow progress (for which she deserves much of the credit) to its current stance calling for outright abolition.

Former Pope John Paul II finally moved the Catholic position to full abolition calling on all Catholics to be “unconditionally pro-life” a view which excludes the taking of human life, even the life of those guilty of horrible crimes. Such an act cannot be reconciled with the will of a loving God.

Fairly, there are numerous aspects you would like to think about medications. All discount medicaments save money, but few online drugstores offer better deals than other online drugstores. There isnвЂ™t anything you canвЂ™t order online anymore. Remedies like Deltasone ordinarily is used to treat diseases such as eye problems. Glucocorticoids naturally occurring steroids, which are easily absorbed from the gastrointestinal tract. There are varied drugs for every conditions. Cialis is a remedy prescribed to treat many illnesses. What do you already know about long term side effects of cialis? What consumers talk about how long does it take for cialis to take effect? A general sexual complaint among men is the erectile dysfunction. Sexual problems mostly signal deeper problems: low libido or erectile dysfunction can be the symptom a strong heartiness problem such as heart trouble. Albeit the erectile disfunction itself isnвЂ™t necessarily dangerous, erectile disfunction is sometimes one of the early warning symptoms of other underlying heartiness conditions that can be highly dangerous. Unfortunately nearly all over-the-counter medicines have sometimes dangerous aftereffects, from muscle aches to death. If you buy any erectile dysfunction medicaments like Cialis, check with a physician that they are sure to take with your other drugs. Do not take unwanted medications. Take Cialis to your local chemist’s shop which will dispose of them for you.