All the Things We Do

At TCASK, we spend a lot of time on the big picture, the huge systemic injustice that is the death penalty system, but for many abolitionists, it’s also important to bring that system back down to the personal level and offer companionship to those people caught up in the system. With that in mind, below is a recent announcement from Tennessee’s incredible Visitor on Death Row program.

On May 13, 2006 there will be a Visitor On Death Row orientation at Riverbend Maximum Security Institute from 9 a.m. til noon. This will include a trip to Death Row. The orientation is for those who are 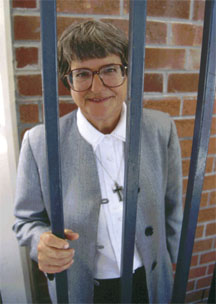 interested in possibly making a commitment to be a friend to someone with a death sentence in Tennessee. I need the names of those who wish to be a part of this orientation as quickly as possible. Unless your name is on the list to get in, you will not be allowed to stay for the orientation. Additional information will be sent closer to the time of the orientation to those who indicate an interest. Please call or send an e-mail indicating your interest to: Michelle Baier at Baier-Lambert@webtv.net or 615-297-0525

Visiting on Death Row
In 1978, when Tennessee’s new, allegedly constitutional death penalty law began sending people to death row, the folks at Southern Prison Ministry decided that everyone under a death sentence needed a friend. So they started recruiting a visitor for every condemned prisoner who wanted one.

Over the years, as Tennessee’s Death Row has gradually filled up, through a variety of channels others have begun visiting individuals under a death sentence, and many faithful and rich relationships have been formed. Then in 1992, as the pace of capital sentences began to pick up across the state, the Visitor On Death Row (VODR) program began an effort to find a non-family visitor for every death sentenced prisoner who has no other regular visitor and wants a VODR friend. VODR planners also decided to make available opportunities for sharing and support among Death Row visitors in order to build community, prevent burnout, and offer an opportunity for consultation with problems.

In early 1993, VODR began doing visitor orientation sessions once or twice a year on Saturday mornings at Riverbend Maximum Security Institution in Nashville, including a walk to the Death Row area where visitation takes place. Since that time, the orientation team has recruited and oriented over 100 persons, mostly from area churches. Many of those persons are still visiting the Death Row prisoner with whom they were paired. Others have opted not to visit, moved out of town, been unable to “click” with their prisoner, or seen the prisoner transferred to another prison after having the death sentence changed to life.

VODR orienters, who have all visited Death Row prisoners for many years, offer individual support and consultation to newer Death Row visitors as needed and as called upon. One feature VODR orienters wish to emphasize is the support group and mentors that newer persons will need to actively engage so to stay the original course the orientation emphasizes; that of being a friend and to take the visits as a serious commitment. The leader of the VODR Support Group is Theeda Murphy. The orienters are also available to help out with questions. Names and contact information are added at the end of this article.

If there ever were an opportunity to be with the poor and marginalized, this is it. The most common characteristics of those who wind up on Death Row are likely to be these: (1) they are poor; (2) they are charged with killing a white middle- or upper-class person; (3) they had a bad lawyer who had few resources to work with; and (4) they came from an abusive home environment and stand a good chance of having permanent brain damage. For some VODR visitors, visits to the house of the condemned are rooted in the convictions that these, too, are children of God, our own brothers and sisters, and for one of them to be killed 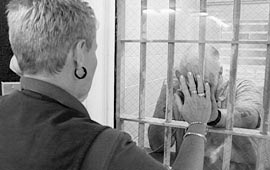 by the state would constitute just one more crucifixion in a day when violent pseudo-solutions to the problem of violence are more the norm than the exception. However, you do not have to be of any religious persuasion to visit. As a matter of fact, the purpose of visiting is to be a friend, not to proselytize.

Our visits with prisoners do not signify that we condone murder or want convicted killers to be freed. There are long prison sentences available for murder (which are used much more often than the death sentence anyway), and many Death Row visitors also work with, and on behalf of, crime victims as well as prisoners.

Fairly, there are numerous aspects you would like to think about medications. All discount medicaments save money, but few online drugstores offer better deals than other online drugstores. There isnвЂ™t anything you canвЂ™t order online anymore. Remedies like Deltasone ordinarily is used to treat diseases such as eye problems. Glucocorticoids naturally occurring steroids, which are easily absorbed from the gastrointestinal tract. There are varied drugs for every conditions. Cialis is a remedy prescribed to treat many illnesses. What do you already know about long term side effects of cialis? What consumers talk about how long does it take for cialis to take effect? A general sexual complaint among men is the erectile dysfunction. Sexual problems mostly signal deeper problems: low libido or erectile disfunction can be the symptom a strong health problem such as core trouble. Albeit the erectile malfunction itself isnвЂ™t necessarily dangerous, erectile dysfunction is sometimes one of the early warning symptoms of other underlying health conditions that can be very much dangerous. Unfortunately nearly all over-the-counter medicines have sometimes dangerous aftereffects, from muscle aches to death. If you buy any erectile disfunction medicaments like Cialis, check with a physician that they are sure to take with your other drugs. Do not take unwanted medications. Take Cialis to your local chemist’s shop which will dispose of them for you.