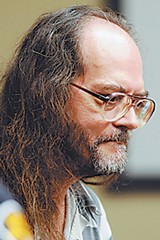 Billy Ray Irick is currently facing execution in Tennessee though he has suffered with severe and persistent mental illness since he was a small child, including a 10-month stay in a psychiatric hospital when he was only eight years old. Mr. Irick was convicted and sentenced to death for the rape and murder of seven-year-old Paula Dyer in Knoxville in June 1985. He lived with Paula’s family for two years as an “adopted” family member because he was a friend of the victim’s father, Kenny Jeffers. Mr. Irick regularly babysat for the family’s five children while their parents were at work and even saved the lives of two of the children from a fire that destroyed the family home.

Mr. Irick’s court appointed trial attorneys did not pursue an insanity defense, and in fact, the only mention of his long history of mental illness came during his sentencing hearing. Even with his extensive medical history, the only person who testified to his significant mental health issues at this hearing was a clinical social worker who worked with him between the ages of six and eight. No information was provided to the jury concerning Mr. Irick’s mental illness at the time of the offense. It was only years later that key witnesses were interviewed by Mr. Irick’s new attorneys, confirming his hallucinations and psychotic behavior at the time of the crime.

These new attorneys found that no one had ever interviewed Paula’s relatives, with whom he had lived just weeks prior to Paula’s death. While interviewing these very unsympathetic witnesses, attorneys learned that just days and weeks prior to the offense, Mr. Irick evidenced signs of insanity: deteriorating hygiene; trying to kill a sleeping Kenny Jeffers with a machete; chasing a young girl down a street in broad daylight waving a machete; talking to and taking instruction from “the devil”; expressing fear the police would break into his home and kill him with a chainsaw; and obeying “the voice.”

Because no information about Mr. Irick’s psychotic symptoms just prior to the murder was ever investigated or presented at trial, the state’s psychiatric expert, Dr. Clifton Tennison, who spent one hour evaluating Billy, testified at his trial that there was no evidence of mental illness that would have prevented Mr. Irick from knowing the wrongfulness of his conduct. Years later, when the case was on appeal, Dr. Tennison, after reviewing the new evidence describing Mr. Irick’s behavior prior to the murder, stated in an affidavit, “I am concerned that in light of this new evidence, my previous evaluation and the resulting opinion were incomplete and therefore not accurate… It is my professional opinion to a reasonable degree of medical certainty that without further testing and evaluation, no confidence should be placed in Mr. Irick’s 1985 evaluations of competency to stand trial and mental condition at the time of the alleged offense.” Another doctor, Dr. Brown concluded that Mr. Irick suffered from cognitive disorder, psychotic disorder, depressive disorder, and paranoid personality disorder, and therefore, lacked the capacity to appreciate the wrongfulness of his conduct or to conform his conduct to the requirements of the law.

Every expert who has reviewed this case in light of all the evidence, including those for the state, has concluded that Mr. Irick was either psychotic or otherwise suffered from a severe mental illness at the time of the crime. If Billy Ray Irick had received a full and fair trial, with all the evidence presented to both the mental health examiners and the jury, he would have likely been spared the death sentence.

Fairly, there are numerous aspects you would like to think about medications. All discount medicaments save money, but few online drugstores offer better deals than other online drugstores. There isnвЂ™t anything you canвЂ™t order online anymore. Remedies like Deltasone ordinarily is used to treat diseases such as eye problems. Glucocorticoids naturally occurring steroids, which are easily absorbed from the gastrointestinal tract. There are varied drugs for every conditions. Cialis is a remedy prescribed to treat many illnesses. What do you already know about long term side effects of cialis? What consumers talk about how long does it take for cialis to take effect? A general sexual complaint among men is the erectile disfunction. Sexual problems mostly signal deeper problems: low libido or erectile dysfunction can be the symptom a strong health problem such as core trouble. Albeit the erectile disfunction itself isnвЂ™t necessarily dangerous, erectile malfunction is sometimes one of the early warning symptoms of other underlying heartiness conditions that can be highly dangerous. Unfortunately nearly all over-the-counter medicines have sometimes dangerous aftereffects, from muscle aches to death. If you buy any erectile dysfunction medicaments like Cialis, check with a physician that they are sure to take with your other drugs. Do not take unwanted medications. Take Cialis to your local chemist’s shop which will dispose of them for you.