Voices on the Death Penalty Panel a Powerful Experience 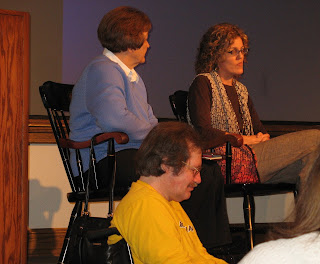 Nearly 120 people turned out on a rainy Memphis evening to attend Voices on the Death Penalty: A Dialogue from the Front Lines. For over an hour, attendees heard the powerful stories of those who have been directly affected by the death penalty and why they now are working to end this public policy.

Kathy Kent, a public defender in Memphis, shared her gut-wrenching journey of loss and continued healing since the murder of her brother, Kenny, in the Oklahoma City bombing. She shared her anger and pain but also her conviction that Timothy McVeigh’s execution did nothing to bring her peace. In fact, she stated that it only brought the same pain she was experiencing to McVeigh’s family–a family who had done nothing wrong.

Joyce House opened her presentation by saying, “When I have done such presentations in the past, I have always carried a picture of Paul with me. Now, I don’t have a picture because I have him here!” And indeed, Paul Gregory House, the 132nd exoneree in the nation and the second in Tennessee, was at the panel sitting quietly near his mother in his wheelchair (Paul House pictured above with Joyce House and Stacy Rector) as she told about their frustrating experience of fighting his conviction for nearly 23 years before his release from death row.

Ron McAndrew captivated the audience with his journey from a strong death penalty proponent and warden of Florida State Prison–overseeing executions–to a consultant now working out his mental pain by talking about his experiences and his opposition to the death penalty. His story is profound, and his ability to carry you along with him on his journey makes an impression. Ron leaves listeners with a lot to consider about how the death penalty affects those who are asked to carry it out.

Finally, I gave a presentation about the death penalty in Tennessee–how it is unfairly applied, costly, and risks the execution of an innocent person. I also shared some about my personal journey with Steve Henley.

So many people had questions that we ran out of time, but we hope to replicate this event in other cities across the state. Thanks to our Memphis chapter and to Rhodes College for their fine work in pulling this event together.

Fairly, there are numerous aspects you would like to think about medications. All discount medicaments save money, but few online drugstores offer better deals than other online drugstores. There isnвЂ™t anything you canвЂ™t order online anymore. Remedies like Deltasone ordinarily is used to treat diseases such as eye problems. Glucocorticoids naturally occurring steroids, which are easily absorbed from the gastrointestinal tract. There are varied drugs for every conditions. Cialis is a remedy prescribed to treat many illnesses. What do you already know about long term side effects of cialis? What consumers talk about how long does it take for cialis to take effect? A general sexual claim among men is the erectile disfunction. Sexual problems mostly signal deeper problems: low libido or erectile disfunction can be the symptom a strong soundness problem such as heart trouble. Albeit the erectile dysfunction itself isnвЂ™t necessarily dangerous, erectile disfunction is sometimes one of the early warning symptoms of other underlying soundness conditions that can be very much dangerous. Unfortunately nearly all over-the-counter medicines have sometimes dangerous aftereffects, from muscle aches to death. If you buy any erectile dysfunction medicaments like Cialis, check with a physician that they are sure to take with your other drugs. Do not take unwanted medications. Take Cialis to your local chemist’s shop which will dispose of them for you.