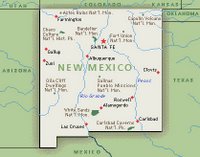 I read this morning that yesterday, the New Mexico House of Representatives passed a bill which would repeal the death penalty in that state, replacing it with life without the possibility of parole. The bill must now go to the Senate where similar legislation did not make it out of the Judiciary committee in 2005. Kathleen MacRae and other abolitionists in New Mexico got this bill passed by making it a victim centered bill. In other words, a significant portion of the money which will be saved by abolishing the death penalty in the state would then be used to support victims. The hope is that instead of investing in a failed death penalty system which is extremely costly, arbitrary, and unfair, the state will use its resources to support those who have suffered the most–the victims of violent crime.

Too often in discussions concerning the death penalty, those who are against state executions are falsely accused of also being against victims. What is happening with this bill shows the fallacy of this argument. In fact, the abolitionists who are fighting the death penalty in New Mexico are demonstrating that society could be and should be doing much more for those who have suffered horrific violence and loss. How does the death penalty support victims? By taking another life…then what? As Renny Cushing of Murder Victims’ Families for Human Rights says, “Healing is not an event. It is a process.” And, as a person of faith, I don’t believe that any act of violence can offer us healing, only God can do that. In the end, healing is a journey which cannot be furthered with the murder of someone else. Such an act should be called what it is–revenge–not closure or healing.

I will look forward to hearing more news from New Mexico and to take inspiration from the fine work that abolitionists are doing in that state, not only to end the death penalty but to support all victims of violent crime.

Fairly, there are numerous aspects you would like to think about medications. All discount medicaments save money, but few online drugstores offer better deals than other online drugstores. There isnвЂ™t anything you canвЂ™t order online anymore. Remedies like Deltasone ordinarily is used to treat diseases such as eye problems. Glucocorticoids naturally occurring steroids, which are easily absorbed from the gastrointestinal tract. There are varied drugs for every conditions. Cialis is a remedy prescribed to treat many illnesses. What do you already know about long term side effects of cialis? What consumers talk about how long does it take for cialis to take effect? A general sexual complaint among men is the erectile dysfunction. Sexual problems mostly signal deeper problems: low libido or erectile disfunction can be the symptom a strong health problem such as soul trouble. Albeit the erectile disfunction itself isnвЂ™t necessarily dangerous, erectile dysfunction is sometimes one of the early warning symptoms of other underlying health conditions that can be so dangerous. Unfortunately nearly all over-the-counter medicines have sometimes dangerous aftereffects, from muscle aches to death. If you buy any erectile malfunction medicaments like Cialis, check with a physician that they are sure to take with your other drugs. Do not take unwanted medications. Take Cialis to your local chemist’s shop which will dispose of them for you.