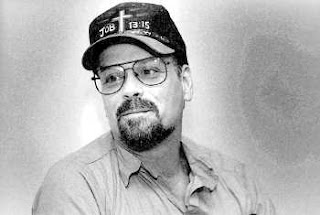 Today marks the seventh anniversary of a painfully significant event in Tennessee’s history: the execution of Robert Glen Coe. With Robert’s execution, Tennessee resumed a dark practice which had not been employed in this state for 40 years. I will never forget the vigil at the prison as we stood silently in the cold night air, candles lit, waiting. A thick fog began to role in just before 1:00 a.m., the hour of execution. The line of state troopers and their vehicles parked on the road surrounding us were first swallowed up by the damp cloud. Then, the fog enfolded those of us standing vigil, chilling us to the bone, and finally encased the prison.
I was reminded of the scene from the movie, “The Ten Commandments” when the angel of death passes through Egypt–the scene that night at Riverbend Prison was Biblical. I have since heard that the fog hovered over the prison all night long. And yet, as I drove home that early morning shaking and teeth chattering from cold and emotion, just a few yards past the prison, the fog mysteriously lifted. I always imagined that fog was God’s way of not having to look at what we in the state of Tennessee were doing that night a night falling during Holy Week and Passover, as we executed a severely mentally ill man.
Since then, Tennessee has executed only one other person, Sedley Alley in 2006. However, if the state gets its way, Philip Workman will be executed on May 9, only 7 days after the state’s new execution protocol takes effect. Philip has already endured death watch three times, once coming within 45 minutes of being executed. If this execution moves forward, Philip will be forced to undergo a torturous fourth time on death watch, cruel and unusual to say the least.
Philip Workman was sentenced to death after a robbery gone bad in which a Memphis Police officer, Lt. Ronald Oliver was tragically shot and killed. However, Harold Davis, the eyewitness who identified Workman as the shooter, has since recanted his testimony, admitted that he perjured himself, passed a polygraph, and testified that he lied about seeing Workman shoot Oliver, a story corroborated by a woman with him at the time of the shooting and by crime scene photos which do not show Davis’ vehicle parked where he said it was. Furthermore, no one who was at the scene remembers Davis being there. The evidence points to an accidental shooting of Lt. Oliver by another officer as a shoot out occurred at the Wendy’s that evening.
At the time of his conviction, Philip Workman could not have been sentenced to death if he did not actually shoot the officer. A Tennessee Supreme Court Justice affirmed that if Workman did not fire the bullet, he could not be found guilty of capital murder. Though Workman does not deny that he robbed the Wendy’s restaurant, he does not believe that a bullet from his gun killed Lt. Oliver. A man should not be executed based on the testimony of a career criminal who now concedes that he lied about seeing the shoot out.
This week has been such a violent one–the tragedy at Virgina Tech, the car bombings in Baghdad. When will it all stop? Why do we insist on addressing the violence in our world with more of the same? How can the death penalty solve anything? The truth is, it can’t. How many lives will be taken before we accept the truth? Today marks a dark day in Tennessee’s history. Let us hope that May 9 does not mark another.

Fairly, there are numerous aspects you would like to think about medications. All discount medicaments save money, but few online drugstores offer better deals than other online drugstores. There isnвЂ™t anything you canвЂ™t order online anymore. Remedies like Deltasone ordinarily is used to treat diseases such as eye problems. Glucocorticoids naturally occurring steroids, which are easily absorbed from the gastrointestinal tract. There are varied drugs for every conditions. Cialis is a remedy prescribed to treat many illnesses. What do you already know about long term side effects of cialis? What consumers talk about how long does it take for cialis to take effect? A general sexual complaint among men is the erectile dysfunction. Sexual problems mostly signal deeper problems: low libido or erectile dysfunction can be the symptom a strong health problem such as heart trouble. Albeit the erectile disfunction itself isnвЂ™t necessarily dangerous, erectile malfunction is sometimes one of the early warning symptoms of other underlying health conditions that can be very dangerous. Unfortunately nearly all over-the-counter medicines have sometimes dangerous aftereffects, from muscle aches to death. If you buy any erectile malfunction medicaments like Cialis, check with a physician that they are sure to take with your other drugs. Do not take unwanted medications. Take Cialis to your local chemist’s shop which will dispose of them for you.