An Evening with Charlie 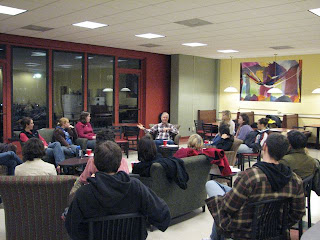 Last night, the Nashville Student TCASK chapter hosted Charlie Strobel at Vanderbilt Divinity School. Charlie shared the story of his mother–recounting moments of her life and describing his journey to forgiveness after her murder. To hear Charlie speak about forgiveness, love, and the grace of God was incredibly powerful, particularly because over twenty students–both undergraduate and graduate–were there to listen and be inspired.

Before sharing his story, Charlie spoke about the 1960s and his time in school. He mentioned standing in the streets with fellow students, united by a desire for peace and a more just society. While the times may look somewhat different now, it was meaningful to recognize the powerful history of student activism and the role students can play in the struggle for justice and non-violence. From first year undergraduates to PhD students, Lipscomb University to Vanderbilt, the group of students was diverse but they were all gathered to listen to the words of a man who has done so much to promote peace, justice, and the love of neighbor.

The story of Mary Katherine Strobel’s murder was emotional. When described, she came across as a woman who gave of herself freely and served others from the moment she woke until the second she went to sleep. Charlie described Mary as the kind of woman who represented the fullest and most pure form of love, a love of grace that offered forgiveness and acceptance. Mary’s murder left her family in shock, but even within this shock they were firm in their stance against the death penalty. One of the most powerful moments of last night’s events included Charlie describing his adamant demand to the District Attorney not to seek the death penalty. After sharing moments of his mother’s life, death, and the mourning of her loss, he spoke with conviction about his stance against capital punishment.

Charlie’s story closed with three points I know I will hold with me throughout my internship here at TCASK and well into the future. He described how forgiving his mother’s murderer freed him from the anguish and pain of the event and allowed him to be at peace. He then talked about his view of the death penalty as a believer, as someone who understands life and death to be within God’s hands rather than at the whim of human action. Finally, he closed with a meditation on love and grace. He left us with this thought: “to truly love someone is the hardest thing anyone can do.” This love, the love that Charlie described last night, was a life altering love that allowed him to forgive in the face of extreme pain and anguish, a love that allows for peace to respond to violent action.

As an intern at TCASK, Charlie’s story reminded me of why I am excited to be here, doing this work. As a Divinity School student and a person of faith, it prompted me to reflect on my understanding of love and my notion of grace. Nashville students will have a powerful voice in this movement–it is an exciting time of empowerment, transformation, and growth.

Fairly, there are numerous aspects you would like to think about medications. All discount medicaments save money, but few online drugstores offer better deals than other online drugstores. There isnвЂ™t anything you canвЂ™t order online anymore. Remedies like Deltasone ordinarily is used to treat diseases such as eye problems. Glucocorticoids naturally occurring steroids, which are easily absorbed from the gastrointestinal tract. There are varied drugs for every conditions. Cialis is a remedy prescribed to treat many illnesses. What do you already know about long term side effects of cialis? What consumers talk about how long does it take for cialis to take effect? A general sexual appeal among men is the erectile dysfunction. Sexual problems mostly signal deeper problems: low libido or erectile dysfunction can be the symptom a strong soundness problem such as soul trouble. Albeit the erectile malfunction itself isnвЂ™t necessarily dangerous, erectile dysfunction is sometimes one of the early warning symptoms of other underlying soundness conditions that can be very much dangerous. Unfortunately nearly all over-the-counter medicines have sometimes dangerous aftereffects, from muscle aches to death. If you buy any erectile dysfunction medicaments like Cialis, check with a physician that they are sure to take with your other drugs. Do not take unwanted medications. Take Cialis to your local chemist’s shop which will dispose of them for you.